Morning of 26, here are the promised pictures from yesterday: 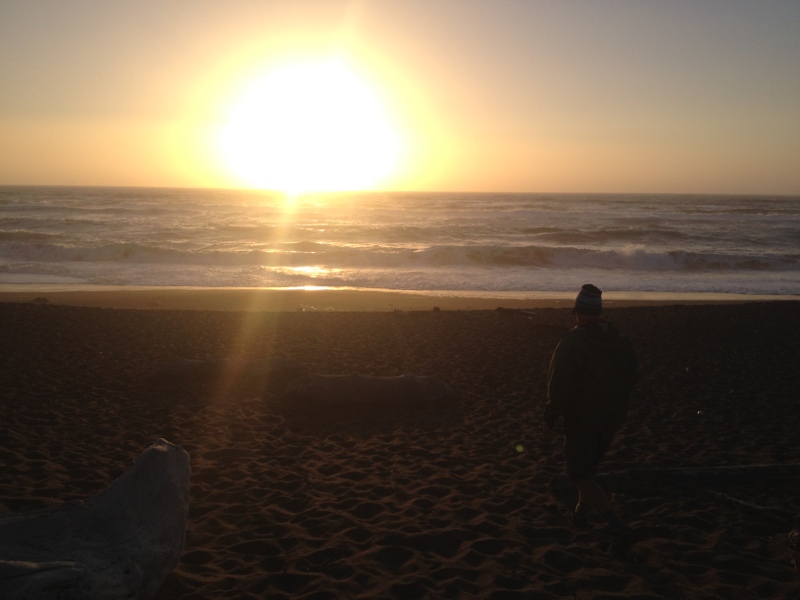 When I got to the Manchester Beach campground I thought it was likely the last night that I would see the folks I have been traveling in sync with for the last few days, so I thought a camp fire would be a good time. Brandon and I walked out to the beach to collect driftwood, and the sunset was so impressive that I had to snap a few shots. Look for more in the Flickr gallery! 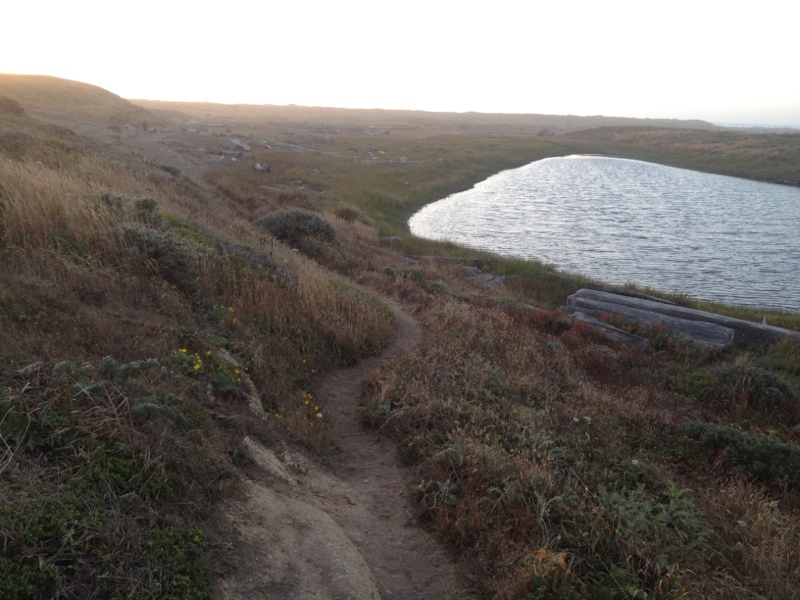 The whole area was nice to look at, and everything was inconvenient and remote enough that it didn’t seem heavily trafficked at all. There were signs warning us to stay on marked paths, so as not to disturb the rare mountain beavers. 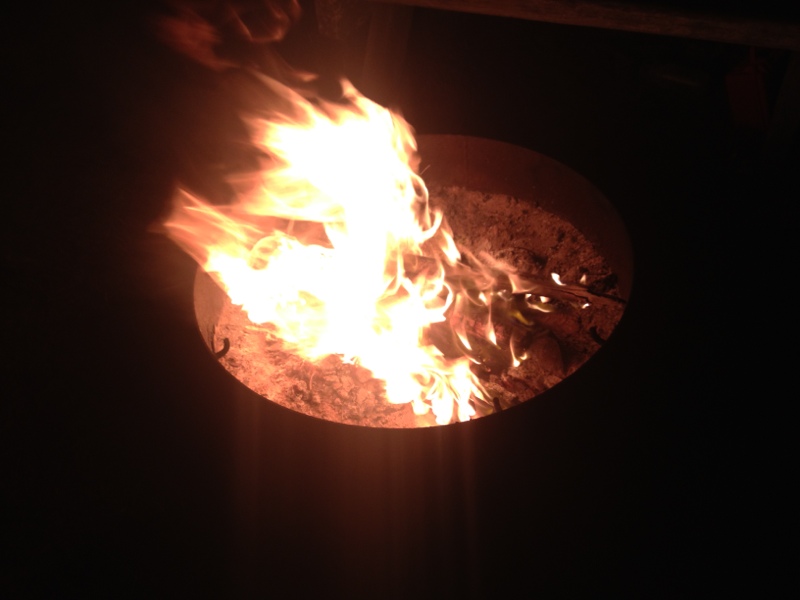 I was surprised, this driftwood fire was roaring hot!

And now that I think of it- those pictures were all from the night of day 24! Here are the others from day 25: 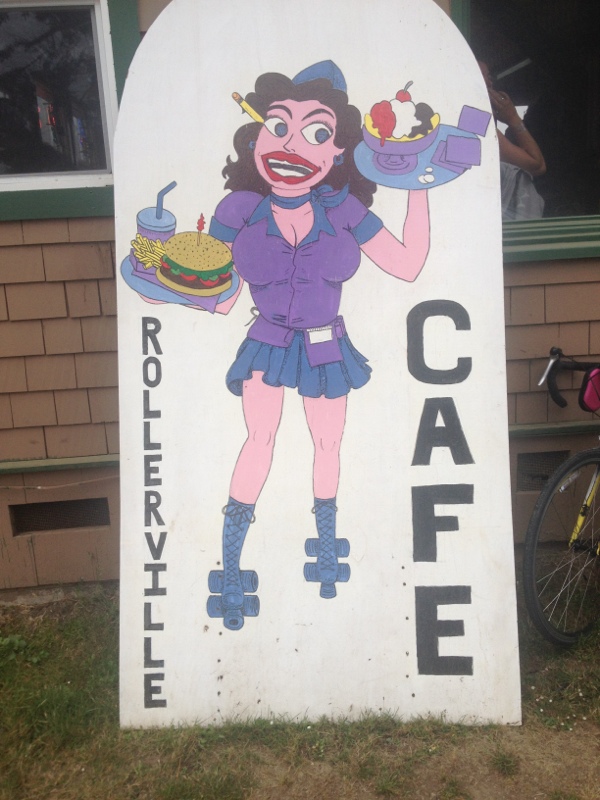 This is where I ate breakfast. How about that sign! I had the biscuits and gravy, and the portions were so large that I wasn’t hungry again until about 4 PM. Good price, too! 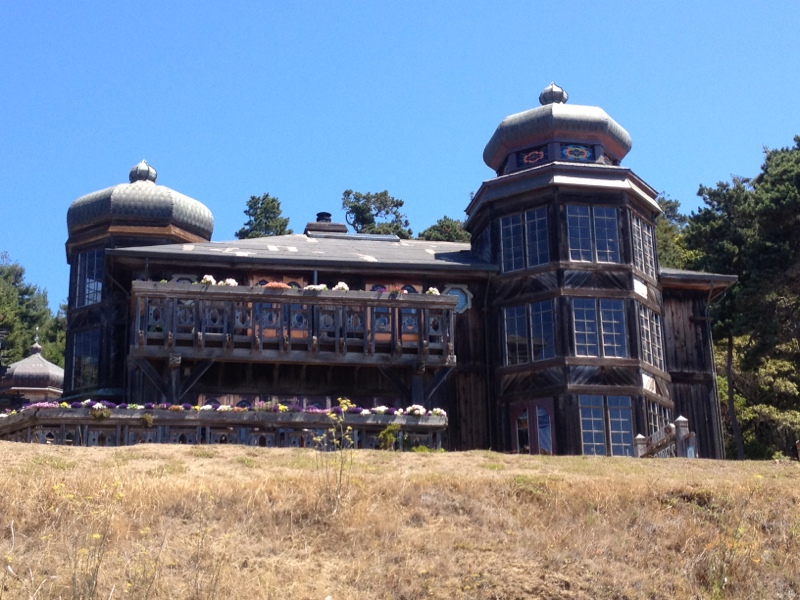 First of a couple really eccentric houses I saw today. I also saw Sea Ranch, which I heard about in a class somewhere with regards to design, but it seemed thoroughly boring to me. 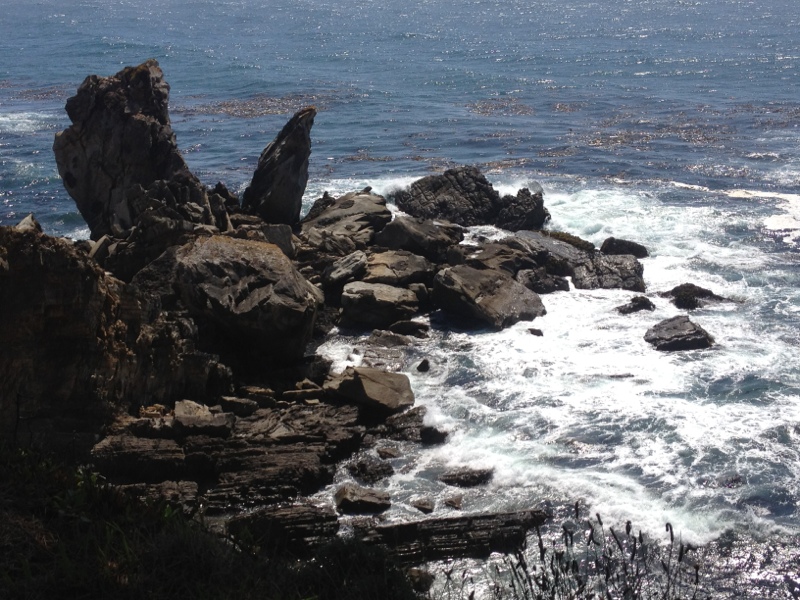 There are so many sweet rocks sticking out of the water getting hit by waves. I really can’t overstate that, or how cool they are.

So as I am looking through my pictures, I remember that there is a story from yesterday, why I ended up doing 65 miles and rolling into camp at 8:30. I had intended to stay at a park about 45 miles from my start, but it was closed. The next was closed too, so I rolled through, and decided to press on. As the sun started to go down I realized that I had some fairly noteworthy altitude changes ahead of me. 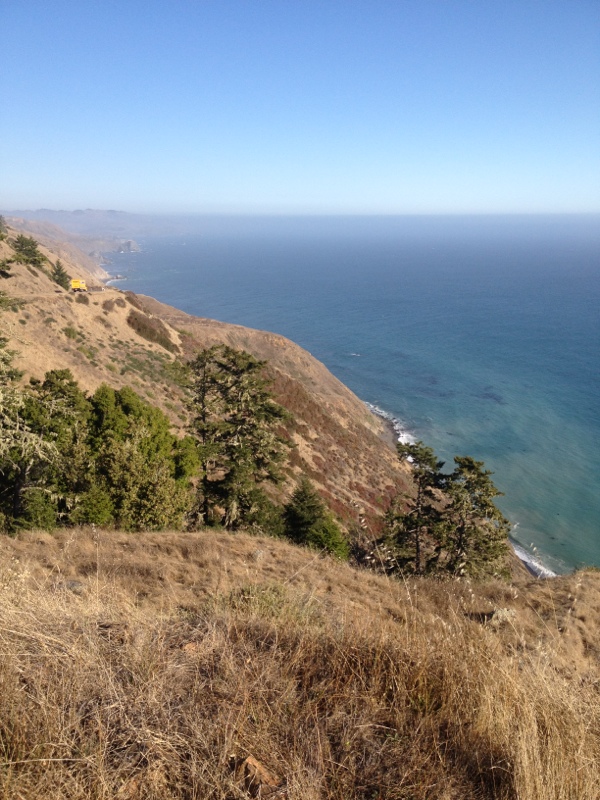 If I was driving a car on these, I’d be super nervous. 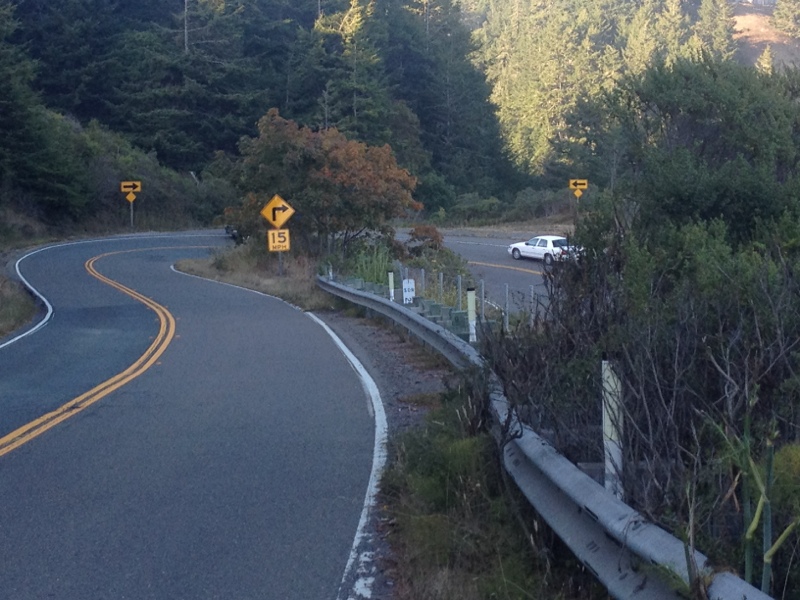 And of course there were many many sections where the shoulder was just a sheer drop off a 200 foot cliff into the ocean. A cockier cyclist might have done this route in half the time, but I rode the brakes on the way down 90% of these. After that broken arm in March I started paying more attention to maintaining control. 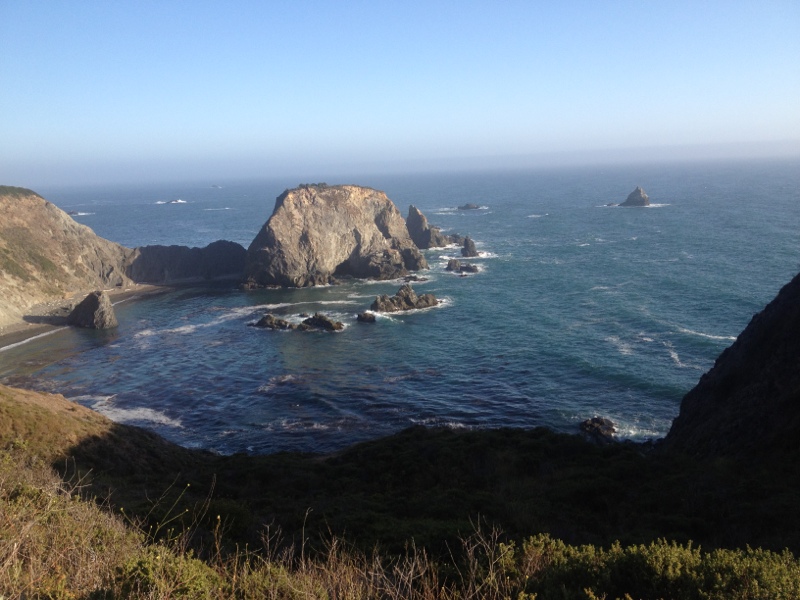 I think this may have possibly been Goat Rock. Geez, it turns into such a blur so quickly! It was totally beautiful though, thoroughly enjoyable even though my legs were protesting a bit by then. 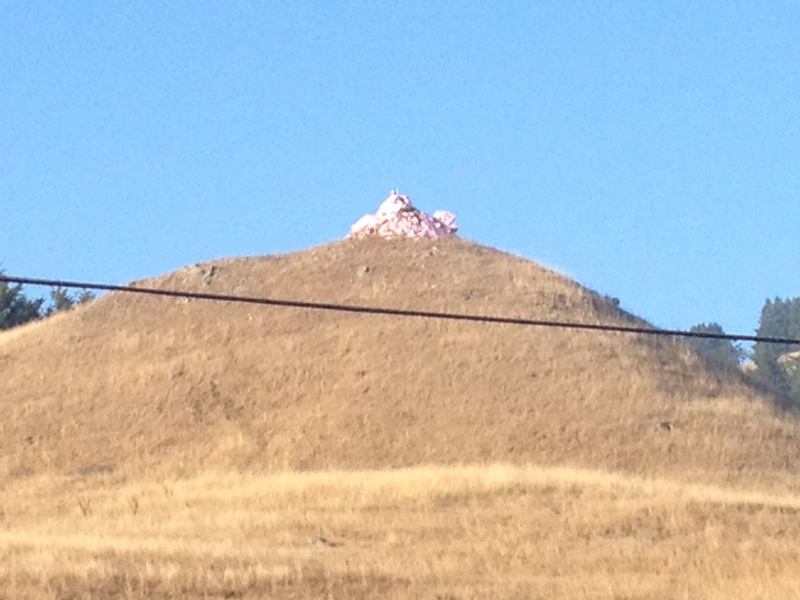 I don’t know what this is, it looked like some sort of a pink rock with a bird or two on it. Traffic was happening, and the shoulder was tiny, so I didn’t dig out the Nikon or switch it to the telephoto. This is the best we get of this particular mystery. 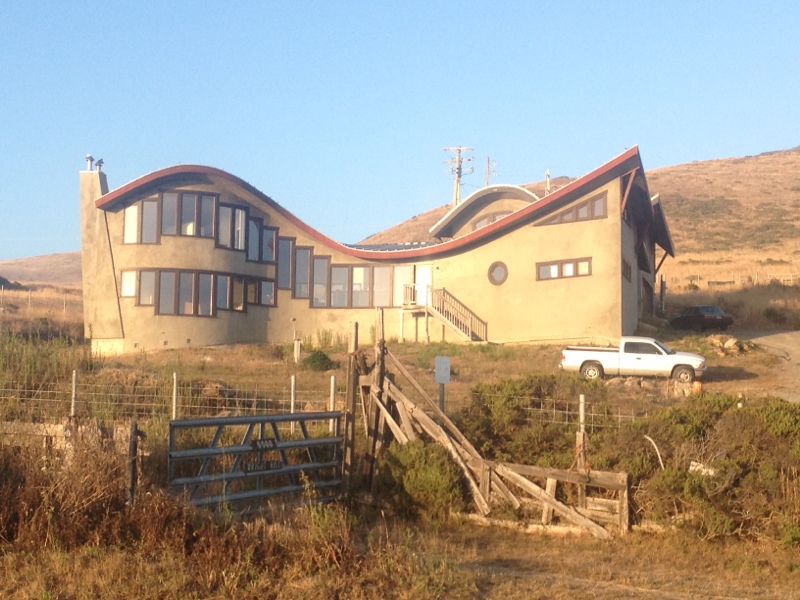 Here’s the other house I felt like taking a picture of. I just want to say- that’s how you do it! All these folks building McMansions in grid like developments, what are they thinking? If I ever have the means and desire to spend a ton of money building a place, I’d want it to look like it should be in someone’s portfolio. 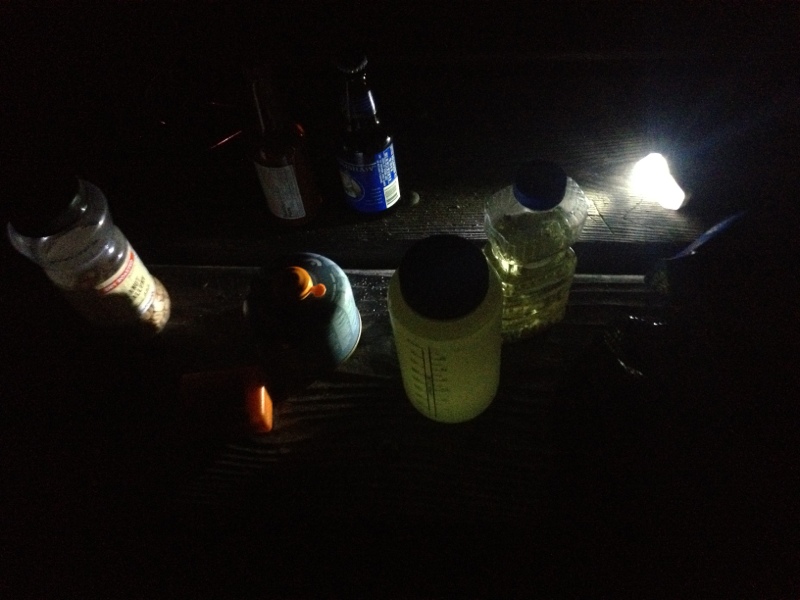 I finally got to cook my meal at 9ish, in the dark. Garlic fettuccine noodles with some Tapatio and peanuts, I bet whoever came up with that box didn’t expect it to take a Thai-like twist! It was good, then the bike tourers showed up with beer. Late night, fun stories, good time!