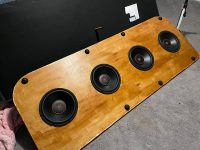 Like many people in the last couple of years I have been expanding my home theater. Back in 2009 or so I experimented with some Aura bass shakers on my couch and I didn’t like them very much. I never figured out how to get them to integrate smoothly and I forgot about them, but as I started to dig more deeply into subwoofers I saw that a lot of people were supplementing their lowest octaves with more involved methods.

The first thing I tried was a Clark Synthesis T239. Since I already had a Minidsp 2x4HD for the pipe subwoofer project it was simple to control the level and lowpass with some precision and this let me achieve much better integration. When it was turned on it was a subtle effect that I almost couldn’t feel but gave bass the impression of being deeper, louder, bigger- it was exciting!

I’m not sure why the Clark was so much better than my first trial with the Aura. It could be that the quality of the transducer, or it could be the processing. Someone out there has done an extensive comparison:

One thing that I noticed was that as the frequency dropped lower and lower I felt less and less shaking. Although the overall effect was fun and exciting, I could tell that with things like dinosaur stomps and spaceships crashing it could be better. That’s where the hoverboss comes in.

“BOSS” stands for “baffle open subwoofer shaker”. The way a subwoofer normally works is a large cone pushes and pulls on the air and creates sound waves within the room. As a side effect the acceleration of the cone generates a Newtonian reaction force on the box. Somebody figured out that you could build a platform for your couch, support it on basically some tennis balls, and then use cheap subwoofer drivers as a mass that would get accelerated by the bass signal . Here’s one build thread: https://www.avforums.com/threads/boss-baffle-open-sub-shaker-mini-riser-build.2269113/

So what’s the hoverboss? Someone else figured out that if you could trap the air being displaced by the woofer it could actually push directly on the ground to give more low end shake. This is really useful because as the frequency goes down so does the available Newtonian reaction force. This lets your couch shake down to 5hz, or even lower, without bottoming out the woofers. Here’s somebody else’s build thread: https://www.avsforum.com/threads/hoverboss-riser.3174695/

I built mine to match the size and shape of the couch, and I was able to pick up the woofers for $30 each on a Black Friday sale. Here’s what the mostly complete platform looks like: 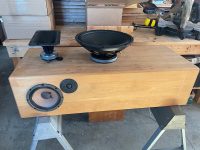 Back in 2003 I worked with a college friend to build a big set of speakers, and in 2015 I did some updates to make them somewhat less terrible- I wrote about that here: https://totallyshould.com/?p=870

One big problem with these speakers was that they were really not capable of producing much bass, and it took so much EQ to balance things out that they really couldn’t play very loudly. They sounded kind of boomy and hollow, probably due in combination to the walls flexing, the ported box tuning, and the sparse batting that was intended to (but did a poor job of) absorbing internal resonances. I wanted to see if I could really make them deliver on the promise of a loud barn speaker with some hifi sensibility.

There’s a project out there that I’ve heard of but didn’t pay much attention to, the Econowave . I didn’t copy it, but I took it as inspiration and found some drivers and a horn. I used the GRS 15PT-8 as a 15” woofer, the PRV D280-ti and the Dayton H6512 waveguide. At the time of this writing this was about the cheapest combination of parts that I could find that would give significantly higher efficiency and bass output in the existing 4.25 cubic foot box.

I decided to skip the port with these. I no longer have access to the Mathcad worksheet for simulating mass loaded transmission lines, and I didn’t think it was worthwhile to do learn how to do it in Hornresp – it really would have taken something like that instead of WinISD to do it predictably because of how tall the box is. Instead, I checked the numbers for excursion limited bass SPL and decided that a Linkwitz Transform was the best way to go. According to WinISD I would be able to extend the bass another half octave lower without running out or power or excursion as long as I also added a steep highpass. I took -3db point from about 60hz down to 35hz, and then added a 24 db/octave highpass at 30hz.

I used a new (to me) measurement technique to dial these in. I used something called the “MMM moving mic method” to perform something resembling an anechoic on-axis measurement of the speaker. The way this is executed is by playing periodic pink noise while taking an average reading on a real time analyzer while randomly moving the mic around the zone of interest. In this case I swung the mic up and down several inches in front of the tweeter and woofer, taking care to keep it moving and not linger in one area too long to too often. In other speakers I’ve checked it’s pretty repeatable. Shout out to Joentell for pointing me toward this method and working with me to get it going.

Ultimately the on-axis response that I’ve created should be a flat horizontal line. it’s not, and there are a number of problems with it. Rather than tear it apart and talk about what’s separating it from a $10k reference monitor like the JBL M2, I’d like to focus more on what it’s able to get done for this all-in price of around $250 per speaker (not counting discman, labor, or wood).

One thing that I noticed with these speakers is that the tweeters and woofer are fairly directional. This is to be expected, and I’m sorry I didn’t have time to measure that, but it means that as you move away from the speaker the highs don’t fall off as quickly as a lot of the home speakers I have experience with. For this reason I kept the absolute level of the tweeter just a bit lower than the measurements might suggest. In the future I’ll do a re-tune when they are in their final home, but for now they’re still just a bit bright since I anticipate they’ll get used from a greater distance than the chair.

Finally I did some distortion tests to make sure that the bass boost wasn’t too aggressive and the tweeter wasn’t stressed from the low crossover. The above graph may not be what people are quite accustomed to seeing.

Here’s another way of presenting the same data. It shows that above 100hz distortion mostly stays below 1% at 85db at two meters. Compared to home audio equipment that’s respectable!

That just about wraps it up. These things have some new life and in their latest form make Pink Floyd and Emerson Lake and Palmer a lot of fun. Thanks for reading!