A lot of time has passed since my room equalization post in August 2016, and the stereo is now in a different room. Looking back, I think that one of the biggest problems that I had in my attempt at equalization was that I was aiming for the wrong target response, and wasn’t doing enough to actually treat the acoustic problems before equalizing. With the two of us basically living in one room and a bedroom I wouldn’t have been able to really add a lot of acoustic treatment without it being too ugly for Kaitlyn to put up with, but now we have an office in the house where I can make things as ugly as I want. So, here’s the ugly office… 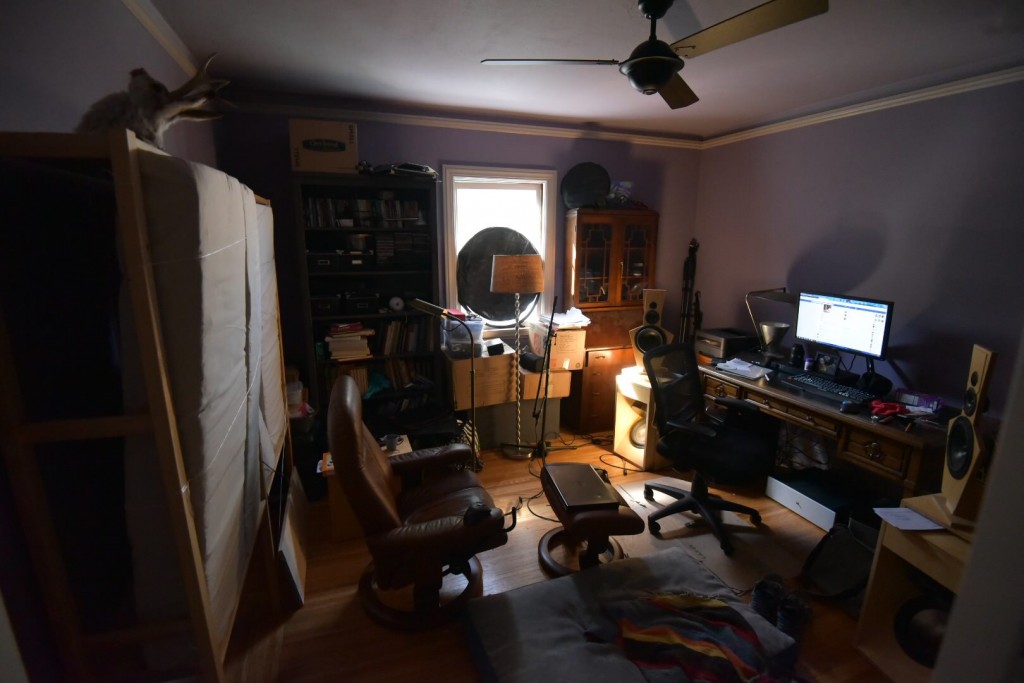 There are a few major acoustic problems here.

First, it’s a square room. Any reflection or reverberation that goes from the front to the back wall also happens from side to side, so the shape is fundamentally bad for even bass reproductions. This is a 12x12x8 foot room, so since the speed of sound is 1125 feet per second you’d expect the first resonance to happen at about 47 hz. The math behind that is 1125 feet per second/12 feet = 93.75 cycles per second, and the first resonance happens with the pressure fluctuation (zero velocity) on the wall, and velocity fluctuation in the center of the room, so a half wave, so the resonance happens at half of 93.75.

Here’s a raw measurement of one of the speakers playing before I’ve done anything to help: 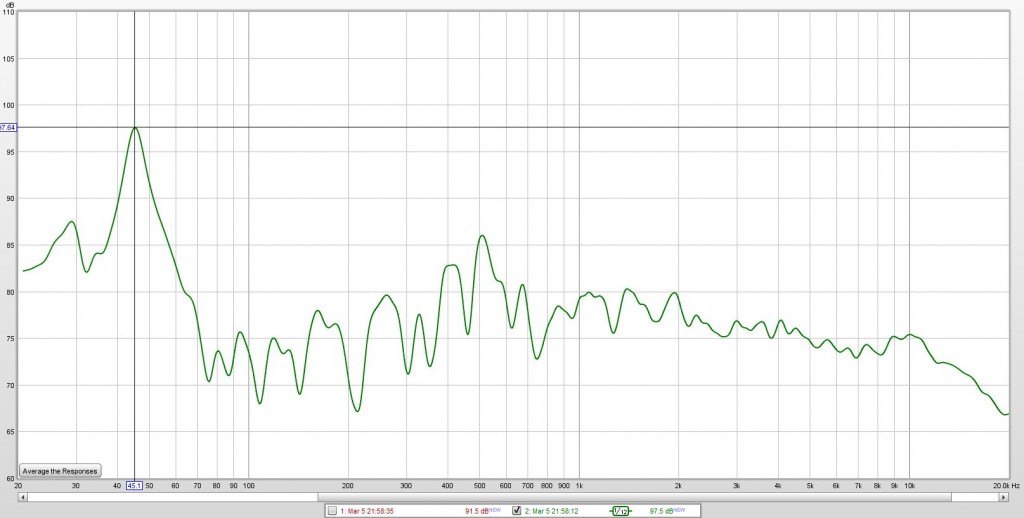 So, what’s wrong? Obviously there’s a huge peak in response a little lower than that predicted 47hz, but there’s something else going on too. As I said, my first attempt at correction in the old place was aiming at the wrong target response. When I applied the correction filters it sounded weak in the bass and I didn’t understand why. It turns out that there’s something called the Harman Target Curve that describes the frequency response that sounds most natural. You’d think that it would be perfectly flat, but when a sound system is set up that way it sounds weak in the bass and too bright in the highs. The preferred shape is a bass boost starting below ~150hz, flat response up to 1-2khz, then gradually falling response above that.

It turns out that the high frequencies were pretty good, and when you line up the bass according to the desired curve, that big peak at 47 isn’t even the worst problem.

In the new office, this is something I can hear. The bass between ~60 and ~200 is what gives bass that tactile feeling, where you can feel the drums, and that’s what not coming through like it used to, or like I know it could. The problem is that you can’t just boost frequencies that are too low. They’re too low because things are physically cancelling out or are driving modes that have dead spots at the listening position, and increasing the drive level doesn’t help much and adds distortion, cone excursion, and power usage without much benefit.

In order to address some of this, I looked at SBIR, speaker boundary interference response, and found that I should have a pretty big cancellation around 90hz because my chair is 30″ from the rear wall. It’s really hard to absorb frequencies below 500hz, and most of the acoustic foam panels that you can buy do very little at these frequencies. You need something that goes deeper, a lot deeper. I looked at a page of a bunch of absorption coefficients, and played with a porous absorber calculator to see what it would really take to be able to address these frequencies and kill the reflected signal and get my bass back. I settled on [Roxul Safe’n’Sound](https://www.homedepot.com/p/ROCKWOOL-Safe-n-Sound-3-in-x-15-1-4-in-x-47-in-Soundproofing-Stone-Wool-Insulation-1-Bag-RXSS31525/202531875) which was cheap, relatively non-hazardous, essentially fireproof, and capable of absorbing very low frequencies. In order to hold it in place at a distance from the wall, I used some Ikea Ivar shelves that I already had available. This produced a 6″ thick absorber with 6″ of air space between it and the wall.

Here’s a graph showing the effect of the absorber.

The smoothing is a different scale to make things easier to see as averages, but the main takeaway is that the green line is about 6db higher at 100hz than the purple line. That means that by adding these sound absorbing panels behind my chair the bass notes at 100hz got twice as loud. There were other benefits too. The overall response got a little more even (see 500hz), and the clarity of the sound was improved because I no longer hear the reflected sound behind me delayed by ~4ms. Any early reflections happening before 6 milliseconds will blur the apparent location of the sound source; our brain/ear averages those out. Reverberations happening between 6 and ~50ms are integrated into the perceived sound as loudness, but the first occurrence of the sound is what is used by our brain to determine location in space. This is called the precedence effect, I hope I’ve explained it right. This is why speakers and chairs really need to be at *least* three feet from any walls or major reflecting surfaces for optimal stereo sound, and why most households just don’t get to have that type of sound reproduction.

This is what it looks like on a graph; this is the “Energy time curve“or ETC graph. The graphs shown above show magnitude of sound with respect to frequency, but these show magnitude of sound with respect to time. A perfect source would look like one big sharp spike with nothing after it. A real room shows a series of peaks afterward, the reflections.

That first peak is totally gone, and many of the later peaks are lower in level. I suspect that the two large peaks that are till hanging out at around 8 and 10ms are reflections from the floor and ceiling. I think that the other peaks that went away were from sounds that made a round trip from the back wall to the front and back. I can hear a difference, and the stereo image now sounds clearer, with a more realistic presentation of the performers and instruments occupying specific points in space. Bass is fuller and more even, and things like plucked double bass sound more realistic. That 47hz resonance is still there, but it’s very easy to use an equalizer to knock just that one down a little bit without robbing the rest of the bass.

So, what’s next? There’s still a big dip in response from 100-300hz, and 100 could be louder still. My next step will be to add more absorbing material into the corners of the rooms to make bass traps to absorb some of that resonant energy. This isn’t a high priority since we are making preparations for Baby Carrow to join us soon, but I may do it by the end of the summer since it won’t cost very much or take very long. In the longer term, I may purchase some software to further process the sound. I had a free trial of one package that made a very noticeable and favorable improvement, but it’s really not a priority right now and if I wait then the price might come down or a competitor could come up with something better.