It’s about time I had an update! This is basically skipping to the end from the last post, building cables, but I’ve been pressed for time in getting them built so I didn’t keep blogging as I went. I have a few pictures of putting the cabinets together, but it’s boring. I didn’t design that part, and I’m not a master craftsman with fancy insight into how you’re supposed to do woodwork. Hopefully the amplifier is a little more interesting.

The LX521 is a four-way speaker with an active crossover, which means that a pair of them need a total of eight amplifier channels. In order to provide uniform sound, all eight channels need to be identical. The amplifier that the designer uses is the ATI 6012, a 73 pound monster that costs about $2800. It’s an excellent piece of gear, but I was trying to keep the budget a bit more reasonable. A pair of Outlaw Audio Model 5000 could have also worked for about $1200 total, but then I’d need to put two 50 pound amps someplace. For just a little more than that I was able to put together a 25 pound amp that keeps everything in one box, and theoretically measures a little bit better. Also, I think that the more you build for yourself the more fun it is!

The amplifier I put together is based on a Hypex UCD180HG class-D module. I couldn’t really figure out precisely what their fancy voltage regulator upgrade would do for the sound, so I skipped it. If you have a dedicated listening room with soundproofing and are *really* into this stuff, then maybe you can give them a try (or go hog wild building with the Ncore modules). Now that I’ve built it I realize that this is dumb, but I used two of the 1200 watt switching power supplies, the SMPS1200A180. There is no way in hell I need that much power. Maybe I could throw a rave some day, but for now it just means that I have a bottomless pit of reserve power that I’ll never touch. By my best estimate, as loud as I’ve turned it up I don’t think I’ve used more than a few dozen watts yet. Hey dad, that means you could run these off of a solar panel pretty easily!

Anyway, on to the case and construction! I used the Modushop Mini Dissipante as the basis for the enclosure. I did some calculations of waste heat and fin area and all of that, and I must have messed up a decimal place or something, because I definitely didn’t need all of that cooling area. Oh well, I guess the parts will just last longer since they run cool.

The finished amp looks like this in my living room: 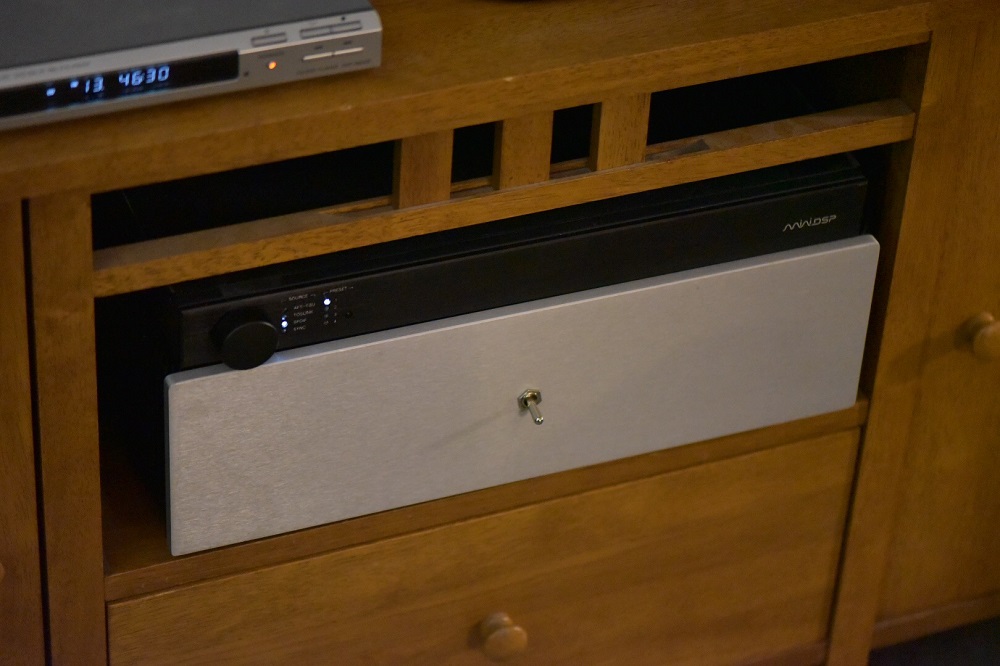 It’s just a plain aluminum panel with an on/off switch. Minimalist, right? The next step will be to make the guts look so nice.

The amp modules have a blue aluminum T-shaped piece with two M3 holes tapped in it. I decided to put all of the holes into an interface plate, and then bolt the plate to the heat sinks. First I drilled and tapped some holes in the aluminum heat sinks, as shown here: note that I used an old T-shirt to protect the kitchen table, and the glass of beer with a lime in it was in fact a mexican style beer by the local brewery, 21st Amendment. 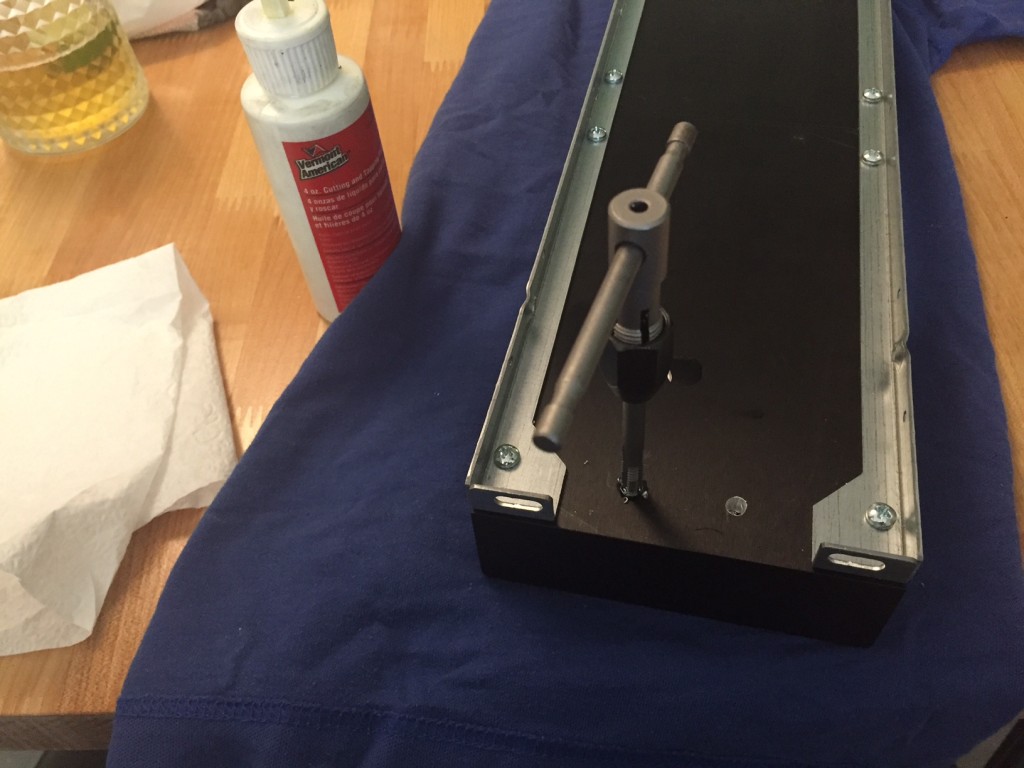 Next I laid out the interface plate using some calipers and an automatic center punch to give even spacing. You can see that tool in the upper left corner of this picture. This is really useful for achieving a medium level of accuracy in an apartment with hand tools. It’s not like when I had a techshop membership and would do this stuff on a mill, but it at least keeps the hole positions accurate enough that I can generally get them to line up. 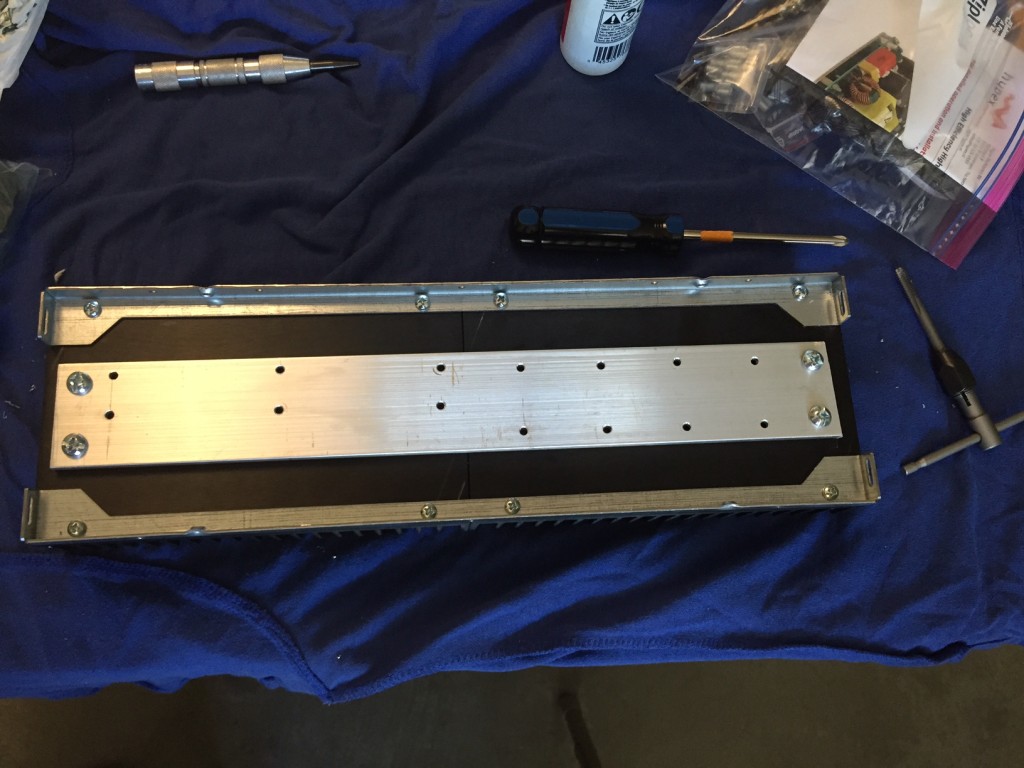 There are two 1/4-20 pan heads at each end of the interface plate, and if this were going to have a really significant heat load then I would have used more of them (and a different head) to ensure solid contact along the full length of the heat sink base. It was reasonably convenient though, and I’m not producing that much waste heat, so i thought it was a corner worth cutting.

The power supply module comes with six M3 screws already installed, holding a compression piece against an L-shaped plate. You have to take these out in order to have access to tapped holes to get this face against the heat sink interface plate. You could mount another way, and the manufacturer even says you can just let this thing hang out in free air, but I know that if I keep things cool they’ll last longer (like to pass down to my kids some day). 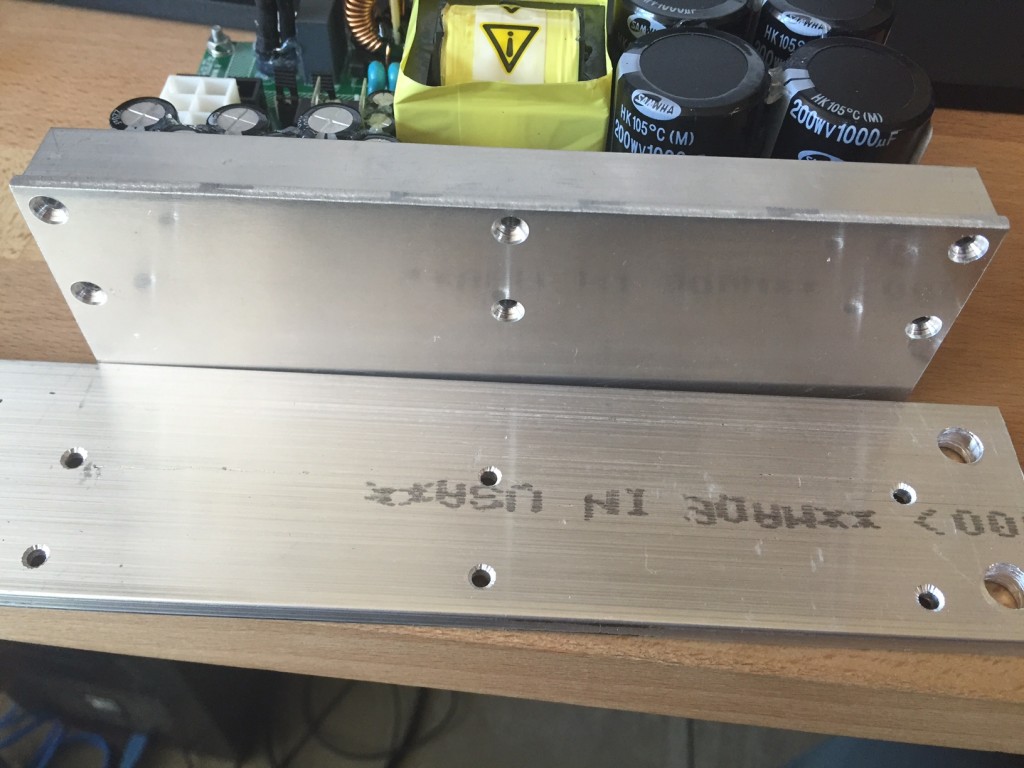 The amp module is surprisingly small for something that can do 180 watts and drive a one ohm load. I slathered on the heat sink grease before attaching them to the interface plate. 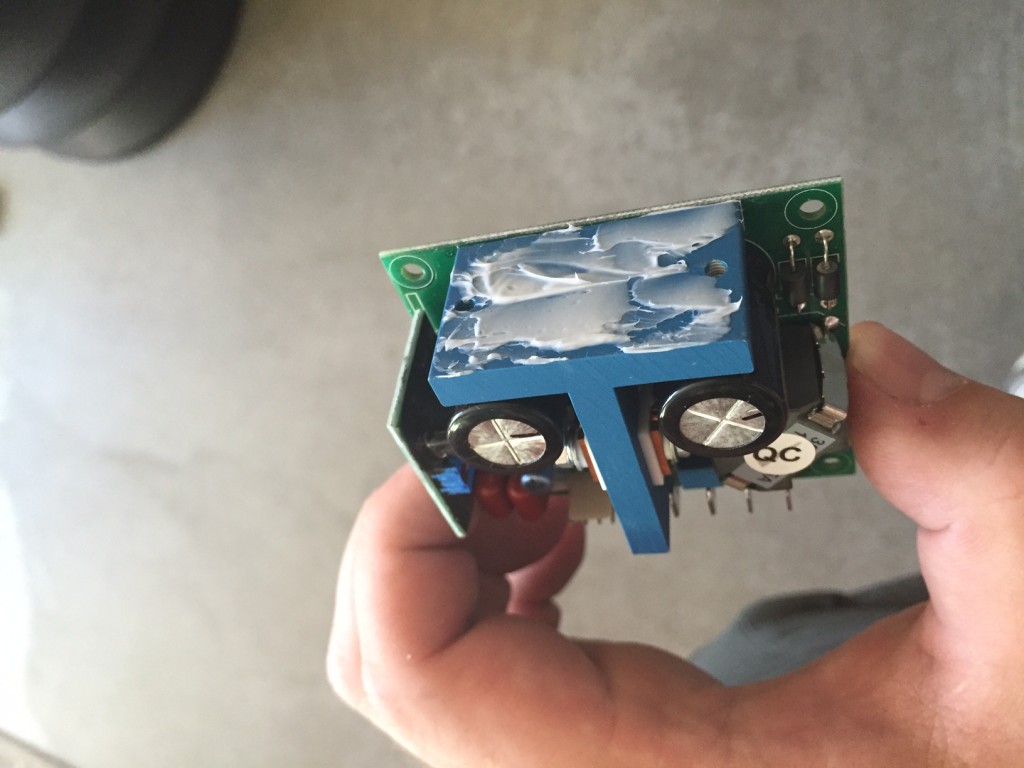 Once they’re all mounted it’s ready to mate up with the heat sinks assembly. You might be able to see that I did some really rough and rowdy countersinks to get those M3  screws to sit flush below the surface of the interface plate. I have some slight concern that some day one of them could be pressed against a capacitor and wear through from vibration and short something out, but probably not. I’m just documenting that concern in case anybody cares, and as something to think about for next time. 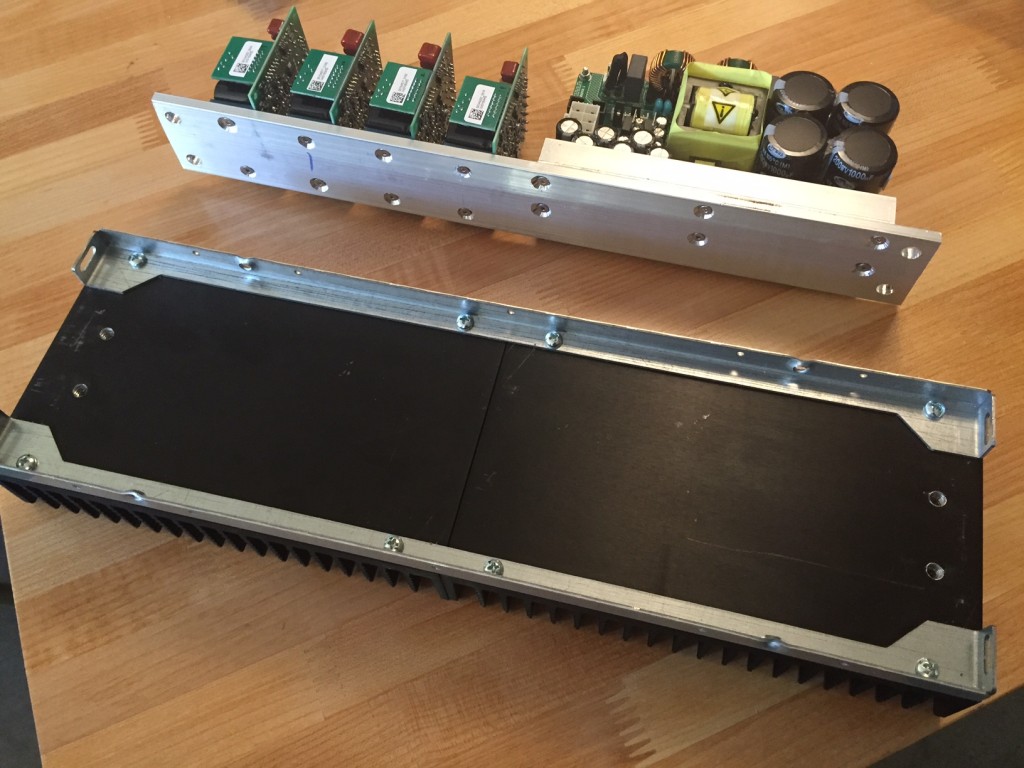 I know you wanted to see this all greased up. Look at those nasty countersinks! Eww! 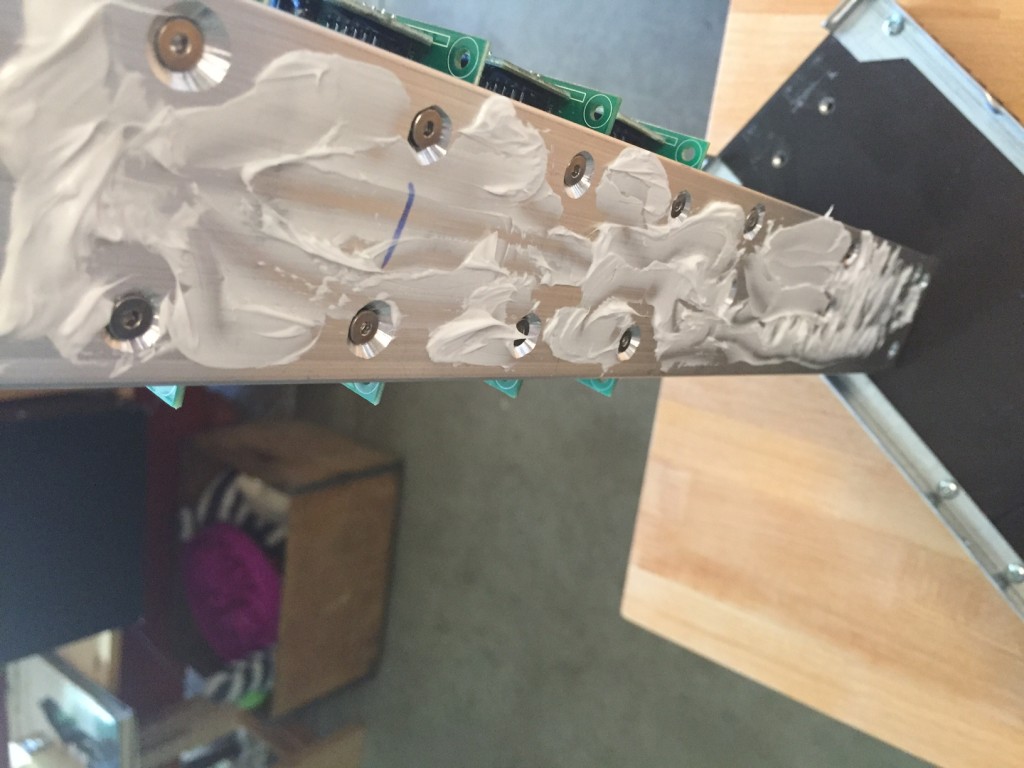 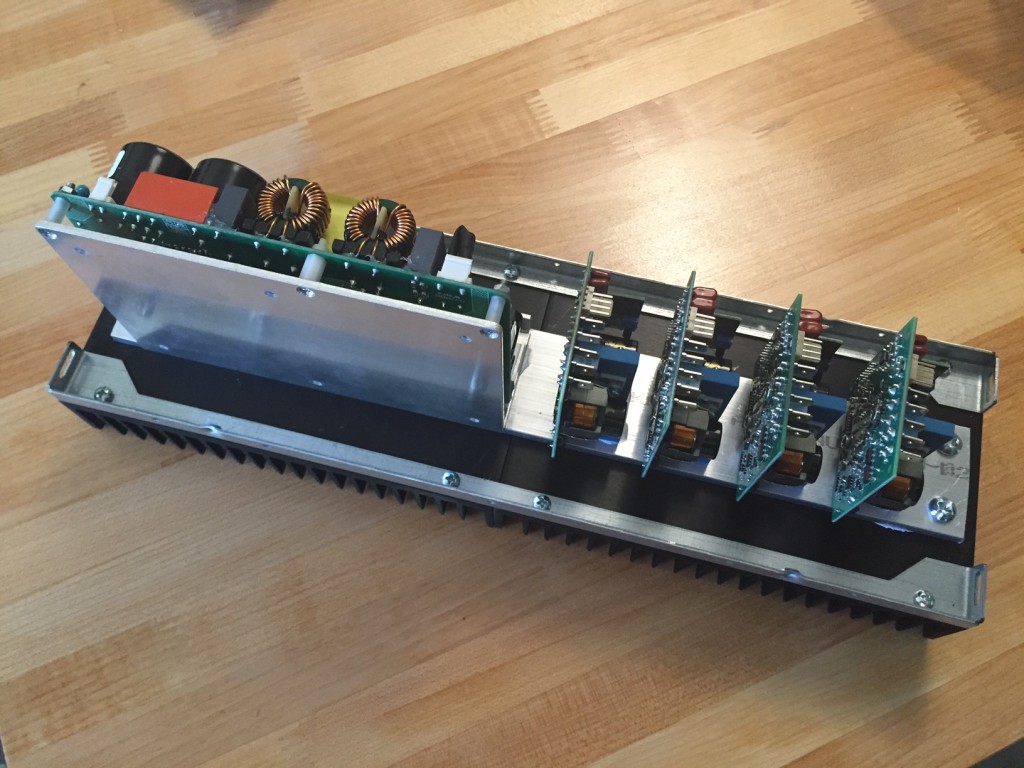 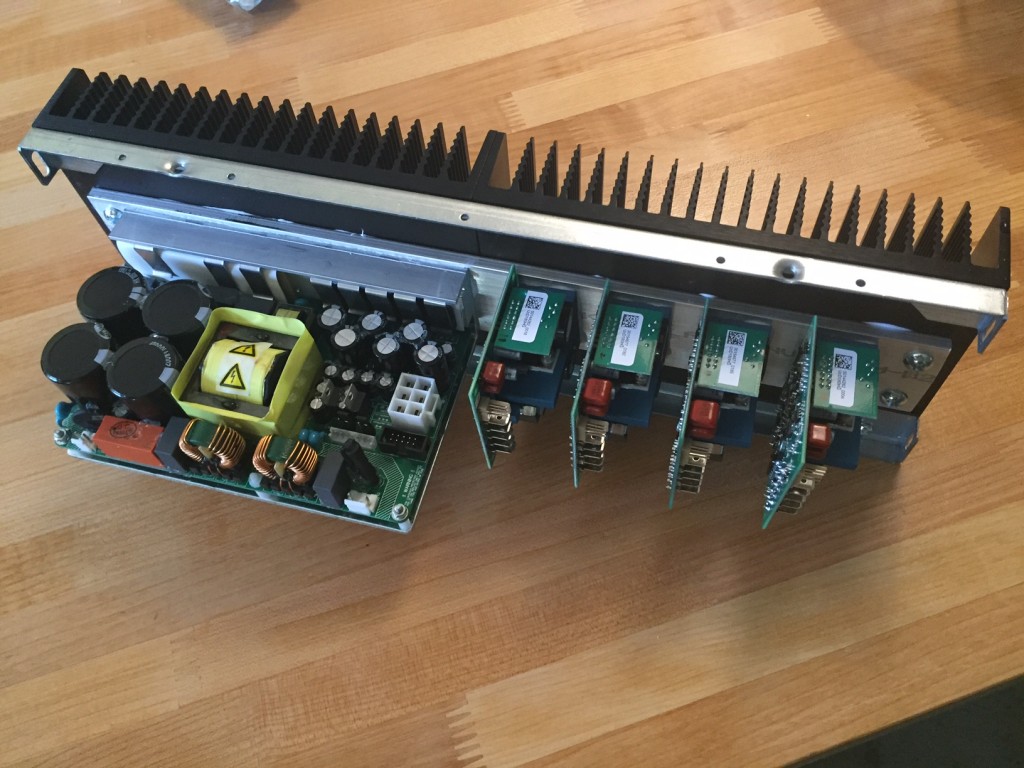 And…. Oops. I built them the same, and that’s not going to work for wiring. I had to redo one of these. 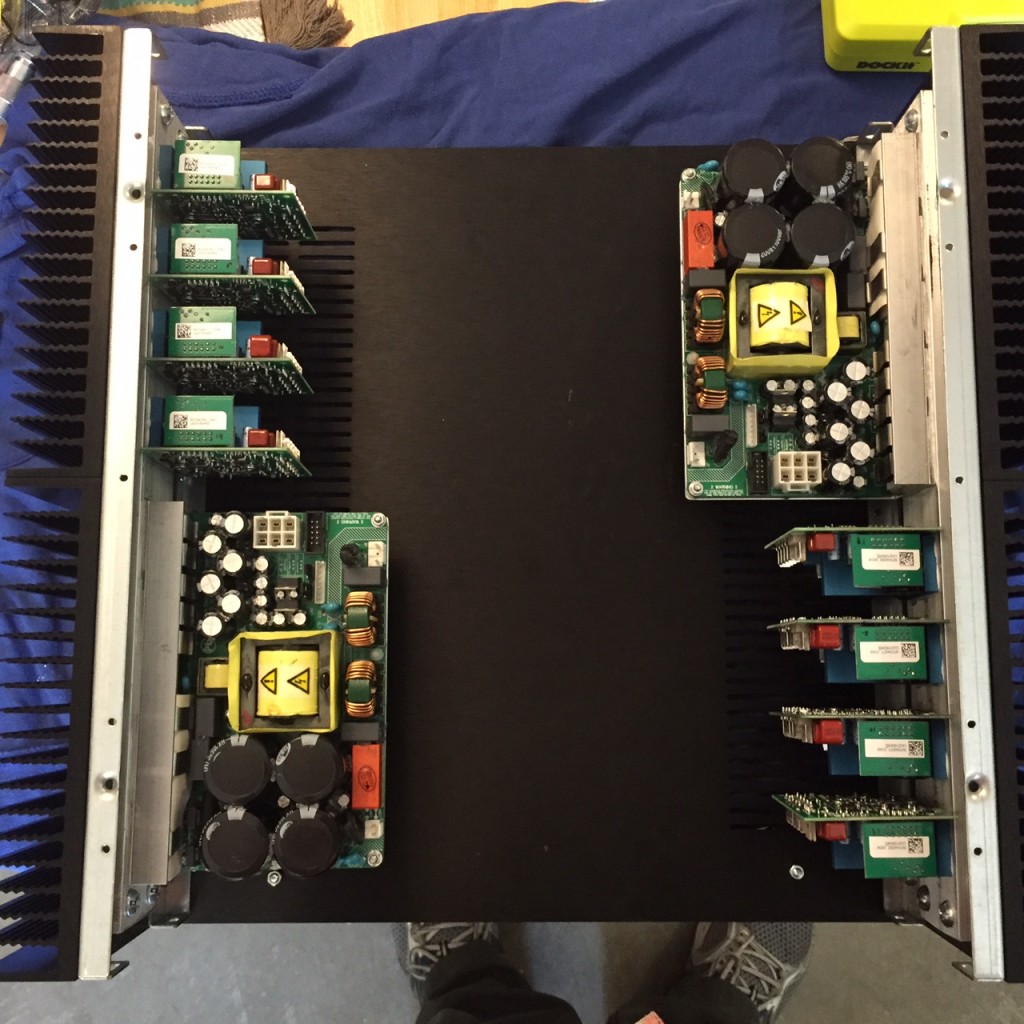 This is a really useful tool that I wanted to take a minute to talk about. This is a ratchet offset screwdriver, and it lets you reach into tight spaces that a regular screwdriver can’t reach. A well designed product won’t require this, but sometimes the designer just can’t be bothered to think about tool access… so that’s when you break this out. The best one I know of is what they used to work on medical linear accelerators at Siemens, and it’s the Chapman. You’ll notice that compared to mine, the ratchet area is much smaller, and the divisions between ratchets are signficantly smaller. That lets you reach into smaller spaces and tighten screws when you don’t have space for much rotation.

This is how I connected the mains power to the front panel toggle switch. It’s a DPDT switch rated for 20 amps, and I made sure that it was large because I wasn’t sure what kind of inrush current the power supplies would draw. As it turns out, they seem to have a nice polite soft-start, or else their inrush is much smaller than the spec sheet indicated because they’re just getting US voltage instead of the 230V that europeans are working with. 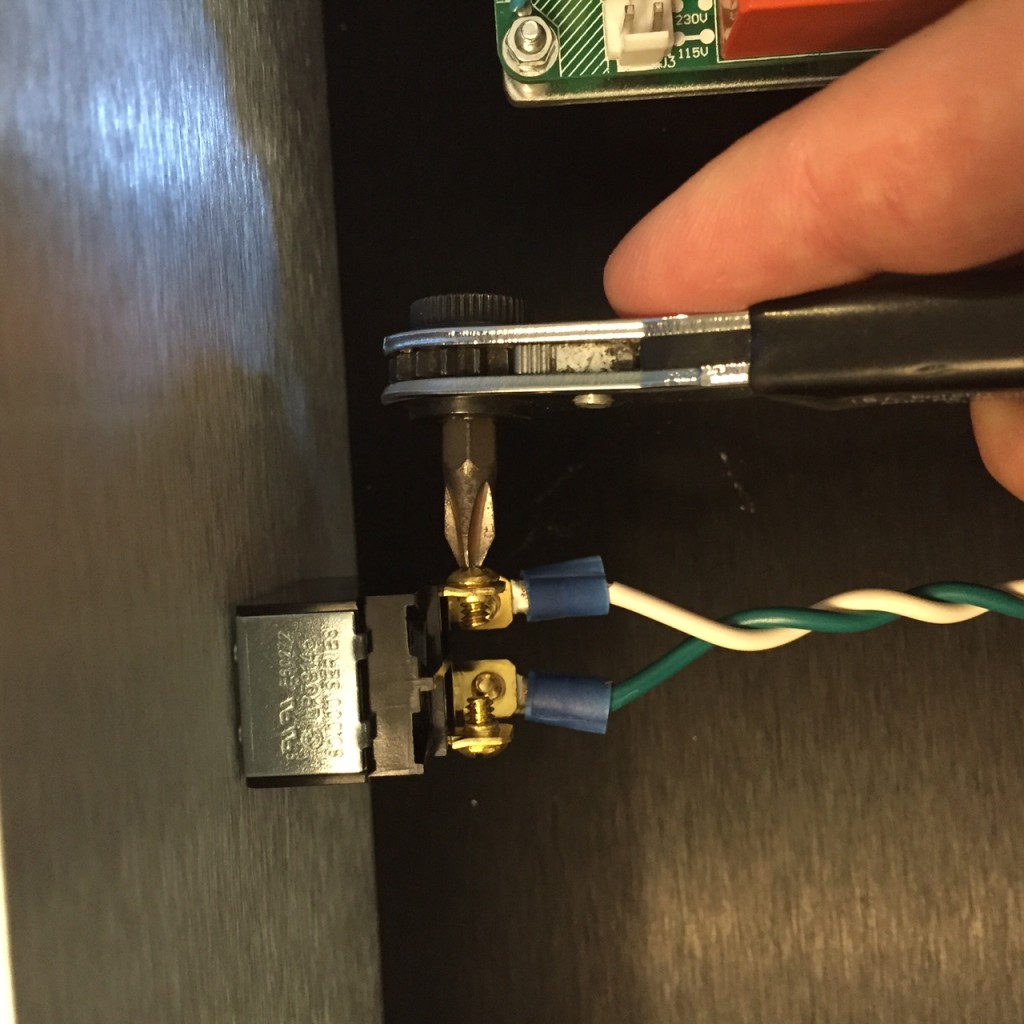 This ended up being a little easier than I expected. The power supply sends a few leads over to the terminal blocks, and each amp takes a positive, negative, and ground input for power. The worst part was all of the crimping. I think I ended up doing about a hundred crimps. There’s a reason they make machines to do that.

In the lower right of this image you can see the twisted pairs of wires going to the speaker output jack, and the black cables soldered directly to the XLR jacks. I need to go back and get everything twisted and trimmed more appropriately before I’ll say I’m done, but for now it works. 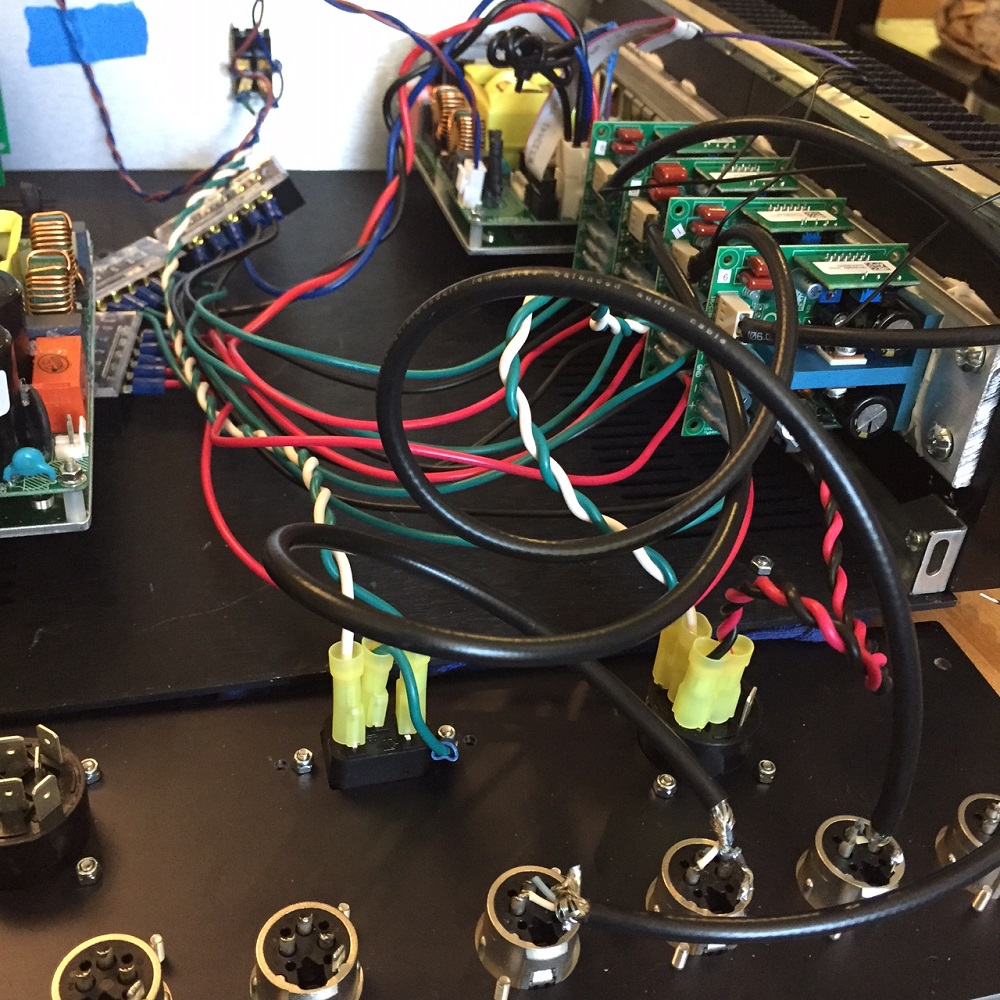 The last thing I did was put channel numbers on each of the amps so that I can keep things straight, and I checked a test signal on each to make sure it wasn’t putting out a measurable DC voltage and a full range music signal sounded right with one of my old speakers. During this step it was really promising to hear music coming out of my old speaker that (I think!) sounded better than the eight year old cheapie receiver that had been driving them.

One thing you’ll notice here is that I used blue paper painter’s tape as a temporary measure to keep anything from shorting out. The maximum voltage in here is 48 volts relative to ground, and 96 volts from the positive to negative terminals. Everything is firmly connected to screw terminals inside of insulated blocks, but a little bit of metal peeks out at the edges, and so I didn’t want to take any chances on something shorting out. The end goal is to have the terminal blocks bolted to the bottom panel of the enclosure in a neat row so that the wires can be routed in a clean and proper way.

The 120V mains line goes to the switch on the front panel using a tightly twisted pair of 14 gauge wires in some ring terminals. I used fork terminals for the rest, but for 120VAC I used insulated ring terminals so the screw would have to fall completely out before the crimped part could fall and contact something else. The rear panel has a three-prong jack, and there’s an earth ground that’s similarly connected to the chassis (you can make that out in the photo above). 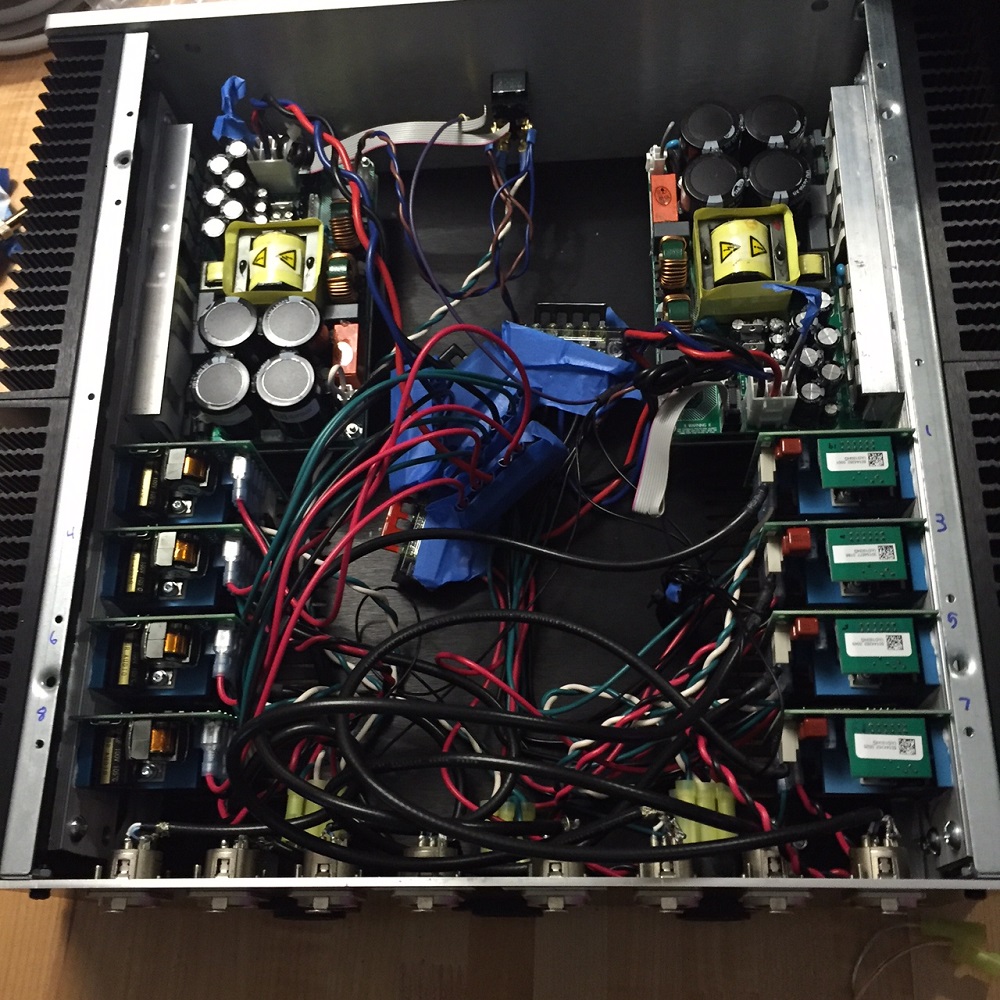 The back of the amp looks fairly neat thanks to Front Panel Express making the panel for me. The large cutouts in thin aluminum and added threads saved me a *ton* of work, and I know they made it look nicer than I could have. I’ll add more labels when I’m done, but for now I know how they’re laid out well enough that a prompt of “1” and “2” is enough that I won’t plug something in wrong. If I did do that, it would blow up my tweeters. 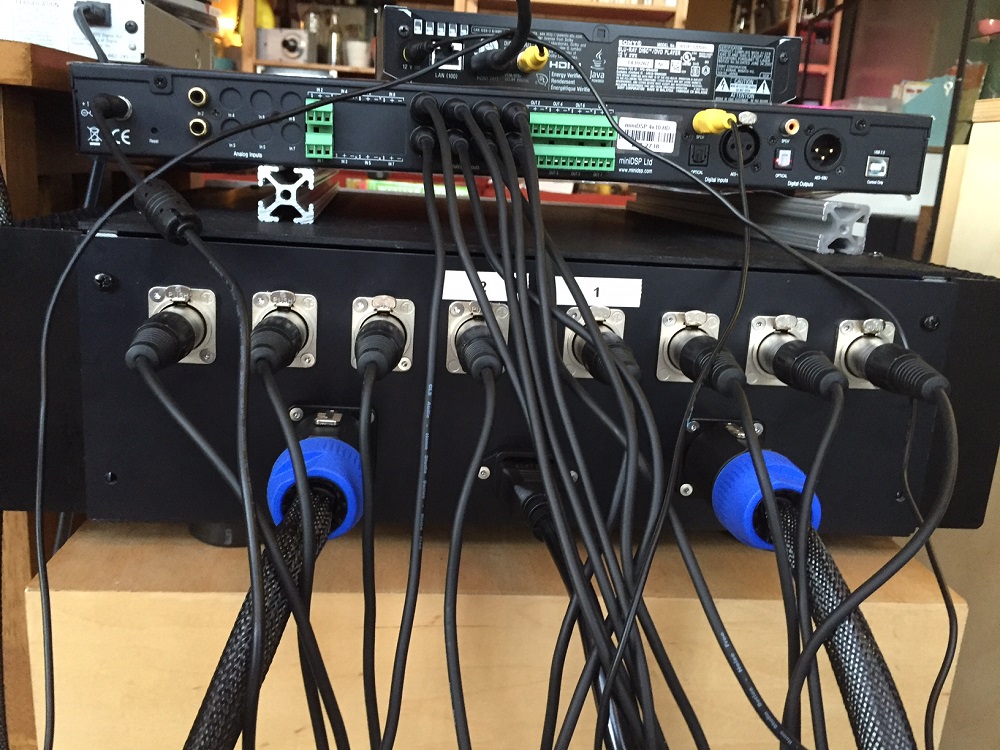 Ok, so that’s all I’ve got for now. I’ll leave you with a cell phone picture of the speakers and amp in the living room. They sound pretty good. I hope you’ve enjoyed reading! 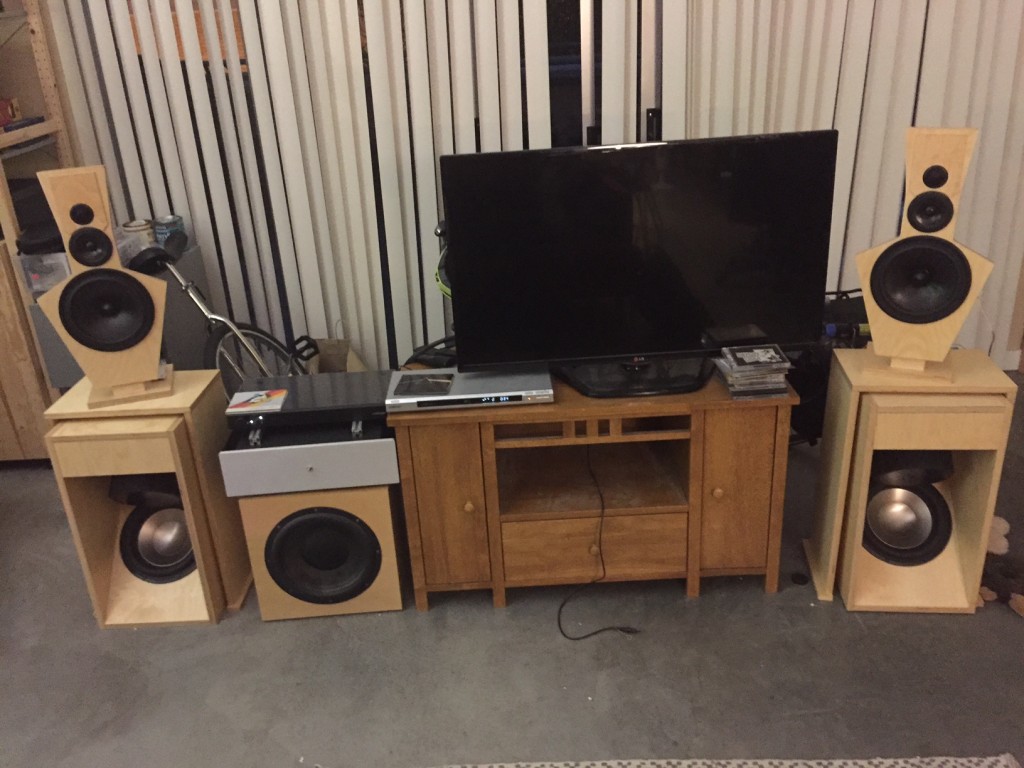