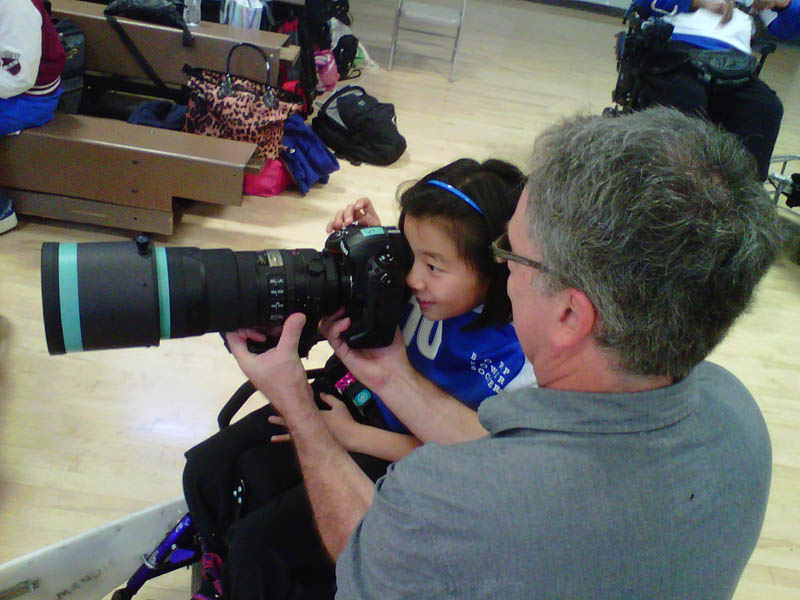 One of the things that I love about taking pictures is the excitement of it. I’m not saying that I like taking pictures because I think it’s exciting- I mean that taking a picture gives me a chance to capture that moment in time when I’m feeling excitement at what I see in front of me, or the possibility of an image.

Some of my favorite photos that I’ve taken have been born of an instant of realizing, “I should totally take a picture of that!” For me, photography at its best is when I can have a moment of “I totally should take a picture of that!”, and capture it in an instant. It doesn’t turn out every time, but when it does turn out I think it’s really exciting. I’d like to share a few examples here. 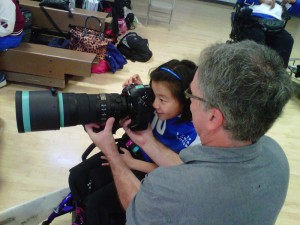 I was walking through the gym during a day of power soccer games, and I saw my friend Scot Goodman letting a young player have a look through his camera. My DSLR was in my backpack across the gym, and it had a telephoto lens on it at the time, so there was no way I was going to get a shot if I was sprinting around and changing lenses, so I whipped out my blackberry and snapped one.  It may not have the highest technical quality, but I still consider it one of my favorites. Her parents loved it too!

Here’s another one- it was back in early December 2011, and I read that there was going to be a complete lunar eclipse starting at 4 AM. I set my alarm, and it was tough to drag myself out of bed to see the thing. I told myself I’d just head outside in my PJs to see if it was cloudy, and I’d go back to bed if it was. It was a clear sky, and as I saw the first bite of the moon disappearing I had that moment of excitement, and ran inside to pack a thermos of coffee and my gear. 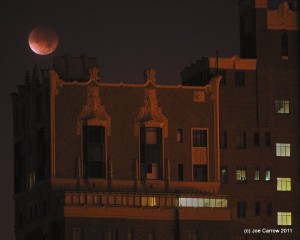 This shot took a little work, and all of my technical fiddling, but the important part was having the moment of excitement where I dragged myself out of bed and went out looking for the right angle for a good shot.

A much more impromptu shot was this one- 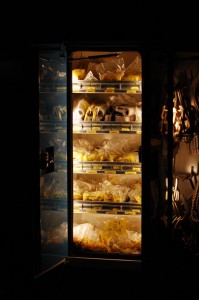 I was out walking with a friend, and I grabbed my camera at the last minute because it seemed like something was going on in the neighborhood. She said, “You should take a picture of that!”, and so I did! I ended up liking this shot, the one she thought was exciting, much more than any of the others that I came up with on my own that night.

Another picture I took that was just a “What the hell!” moment, but took a little preparation was this: 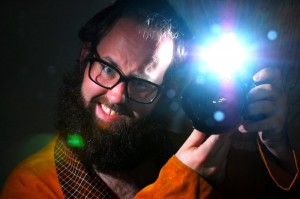 For reasons that you may or may not be familiar with, I’ve had some evenings where I’ve been home alone and bored lately. I thought, “Hey, people take pictures of themselves in bathroom mirrors all the time, I should put a twist on that!”, and so I put on a vintage bath robe, set up a flash on a stand (camera left), used a big lens, and I went for it. Pretty goofy, but it’s more or less what I was going for!

Lately I’ve discovered a new toy that allows me capture and share these moments more quickly and easily than ever before. It’s Instagram!

In case this sounds like it’s turning into a commercial, I’ll go ahead and admit that a part of me is cynical about an iphone application that lets you post a small square image with a short list of arguably cheesy effects applied after the shot. However, I do think that Instagram also brings a few positive things to the table. The constraint to a given format forces you to be creative, and the limited number of things you can do after the shot keeps you from screwing around on your phone for an hour trying to create something after the fact. It’s really about the moment and the idea, and what you did to put your phone in the right place at the right time. Sometimes the effects look really cliched and overdone, but other times they seem to add something to the image.

Have you ever thought of something, maybe a gadget or invention that you wish you could go buy in a store, and then you realized that it didn’t exist? Or maybe you wanted to make a meaningful contribution to a cause, but could not find any existing organization set up to address  that issue? Have you ever had a song stuck in your head, and you struggle to figure out who sang it, and eventually realized that nobody sang it yet?

These situations can be frustrating. Depending on your personal abilities, level of motivation, and free time, you might feel shocked, angry, hopeless, resigned, or… excited at the chance to have found the edge of what’s been done, and to have the motivation to push our world farther. This thing does not exist, but it should. It totally should!

This website is devoted to that moment. It will aim to find and share the experience of finding that edge of what’s possible, and what we do when we get there.