I’ve been interested in speakers and sound for a very long time, and if I had to pick some point in time that started this it might have been in the summer of 2000 when I was working for Radio Shack. I only worked there for that summer before college started, but I had been there long enough to think it was weird when a guy came in and walked straight to the register to ask if we had a certain part in stock. He knew the number without having to check notes, it was the 40-1197. I can remember that number still, he wanted to know if we had any in stock since they were discontinued. I checked for him and had a good look to see if one was lying around, and when I didn’t find any he let me in on why he was looking for it. Apparently this driver could be used in a DIY design that rivaled commercial designs costing many time the cost of materials.

We didn’t really have Google yet in 2000. It had been founded, but I don’t think I knew about it. I was probably still using Infoseek or Ask Jeeves. Regardless, I found some websites and forums dedicated to DIY sound projects, and learned about the Pioneer B20FU20-51FW  and I saw that people were discussing all sorts of designs that used this driver. People were painting thin coats of glue onto parts of the cone to change the frequency response and tune resonances, people were putting modeling clay onto magnet and basket structures, and they were putting this driver into all sorts of boxes and tubes and… *not* boxes, just putting them onto flat panels called ‘open baffles’. More on that soon.

At the time it seemed that most people agreed that the most Audiophile thing to do was to minimize the number of steps between the original sound being recorded and it hitting your ears. Traditional speakers have a tweeter and multiple woofers with electronic components called a crossover to split up the sound, and people on websites like Audio Asylum and the DIYAudio full range driver forum kept saying that the best crossover is no crossover. It made sense at the time, so I ran with it. In 2001 I built some Tapered Quarter Wave Tube enclosures out of 1×10 pine boards and some smaller drivers similar to the Pioneers. They had some interesting sound. They had no bass at all, but there was a kind of clarity in the sound they did make and I was hooked on the idea of it. This is the only existing picture that I have of them. 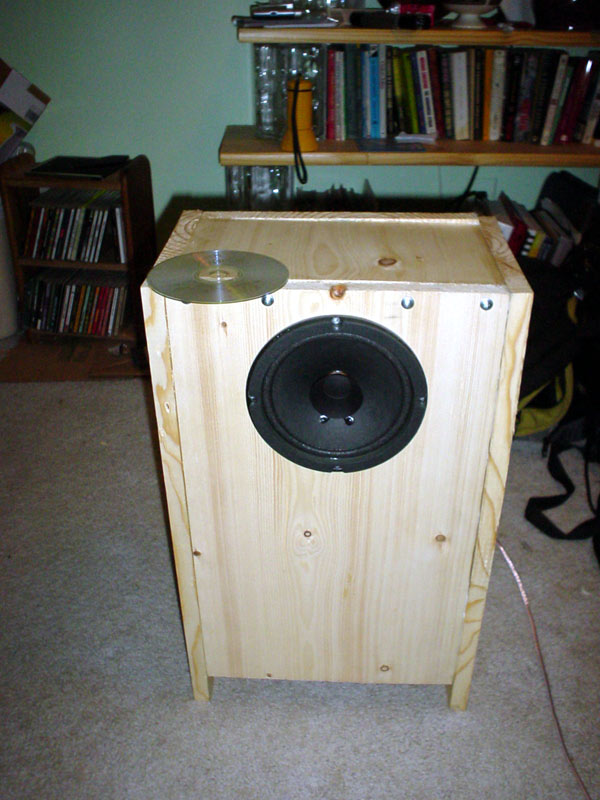 There they are, CD for scale. It wasn’t quite a success, but I was hooked. In 2003/2004 I tried again, and built some “mass loaded transmission line” speakers using Eminence Beta 8 pro woofers and some Morel dome tweeters. This is what they ended up looking like. 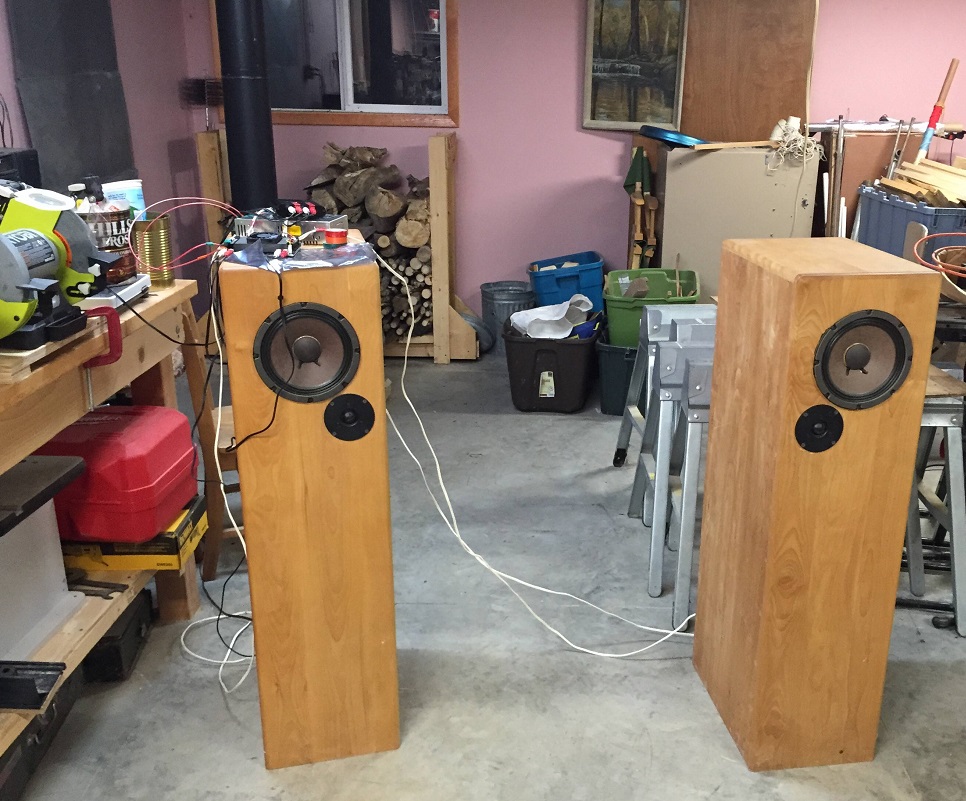 They had some really serious problems. The bass was too weak without major equalization, and the eight inch woofers were relied on to run up to about 5khz- they were doing almost the entire job of reproducing the sound. At the time I designed them I thought that was a good thing- the crossover frequency was well outside of the vocal range, and so it was supposed to be really natural sounding. It turns out that they were beaming like crazy. As you move around the room the character of the sound changes drastically, and even as you sit in place and move your head. The other problem with this is that there is a sharp discontinuity in the polar response of the speakers. This means that the frequency response of the sound reaching your ears traveling directly from the speakers had a drastically different frequency response than the sound that bounced around the room and reached your ears indirectly. This doesn’t sound very natural.

In 2015 I managed to fix these speakers (Most of the way) during a visit to my parents house, and now these speakers keep their barn cheerfully noisy. I used a MiniDSP 2×4 to replace the crossover, and a four channel amplifier to allow an active crossover. This let me move all of the bass equalization into the DSP, and fiddle around with the crossover frequency. By bringing the crossover down to about 2khz where the woofer is better behaved, and by using a sharper crossover slope, the sound was improved a lot. They still have some other problems, but I think those can be addressed with some extra panel bracing and acoustic stuffing.

When I moved from spacious upstate New York to the crowded SF Bay Area, I had to leave those beasts behind and start over. The first speakers that I tried building were some cardboard box speakers, just an experiment with junk parts. 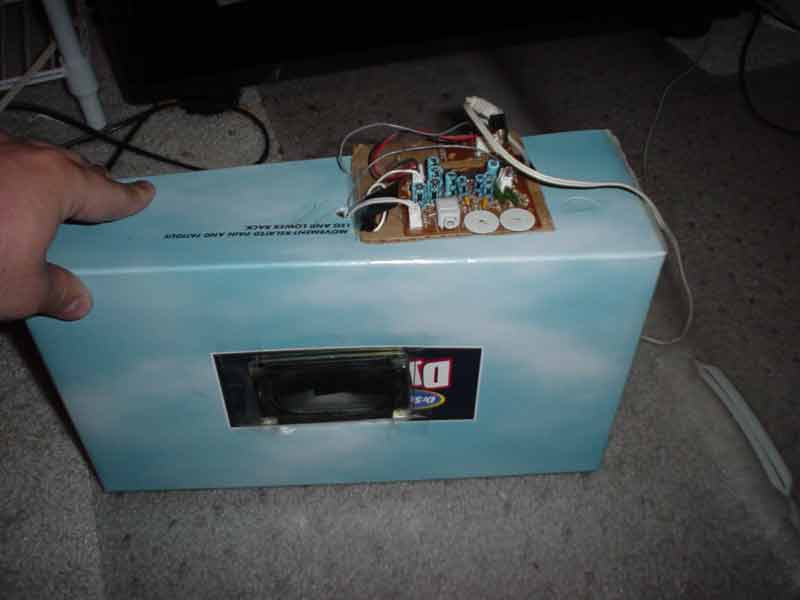 Would you expect those to sound good? I didn’t. The next design I tried out was a little bit more unusual. I tried using heavy duty foamcore as the enclosure walls. I used a little internal bracing and my theory was that if the walls were stiff enough it wouldn’t matter much that they weren’t so strong and weren’t very heavy. Here’s what those looked like. 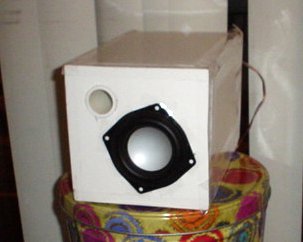 That’s right, I even used a little PVC pipe as a port. The drivers were the 3″ full range Aura NS3, and the boxes shook all over the place when bass played. I recycled these into surround speakers for the home theater, and although they were ugly as sin they actually kind of worked in that capacity. 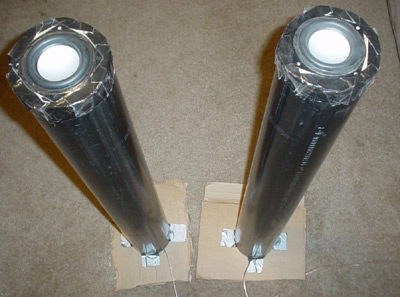 They didn’t have any tweeters or anything to disperse the high frequency sound out at right angles so that it didn’t  have to bounce off the ceiling to get to you, but it was a bit of a step up from the foam boxes. They were at least partially inspired by the Linkwitz Pluto, though I may have had some other influences at the time because I was coming out of a long period of thinking that transmission line speakers are the best.

I can’t remember if it was before or after, probably slightly before the pipes, I built a pair of Modula MT speakers using aluminum cone woofers and a sophisticated passive crossover. The original HTguide.com forum post requires a login to view, but I recommend signing up to see it. The speaker was designed by an extremely experienced electrical engineer, and it allows an unusually steep slope in the crossover to allow a lower crossover point to keep the aluminum woofers happy. Here’s my miserable picture of what that looked like. 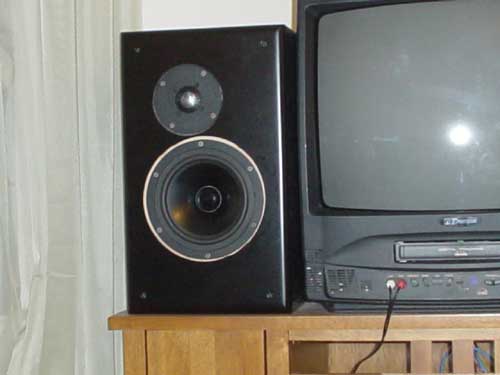 I purchased the cabinets and almost all of the parts from Parts Express, and I just had to cut out and counterbore the two large holes for the drivers. I also had to cut out the holes for the ports in the back, but you can’t see how ugly those are. These are the speakers that I still listen to today, almost nine years later, and now that I  have them set up on stands with some good distance from the wall I can say that they sound pretty OK. All in all I spend about $300 building them, and I compared them to some commercial products at twice the price that I didn’t think were clearly better. They scratched an itch, but I knew that I could do better. There are plenty of times I’m watching Netflix and I have to strain to hear what the male actors are saying, although some of that has to do with room interaction.

In the summer of 2015 I finally had a chance to hear the Linkwitz LX521 speakers at the home of Siegfried Linkwitz, and I decided that those would probably be the last set of speakers that I’d ever want to build. They’re expensive, expensive enough that I feel reservations about building them when that money could go toward something so much more practical and humanitarian, but if I divide that cost over the next ten or twenty years then it’s not so bad. That’s what I’m telling myself.