It doesn’t look like much, but apparently we have passed city inspection for electrical and plumbing in the bathroom. 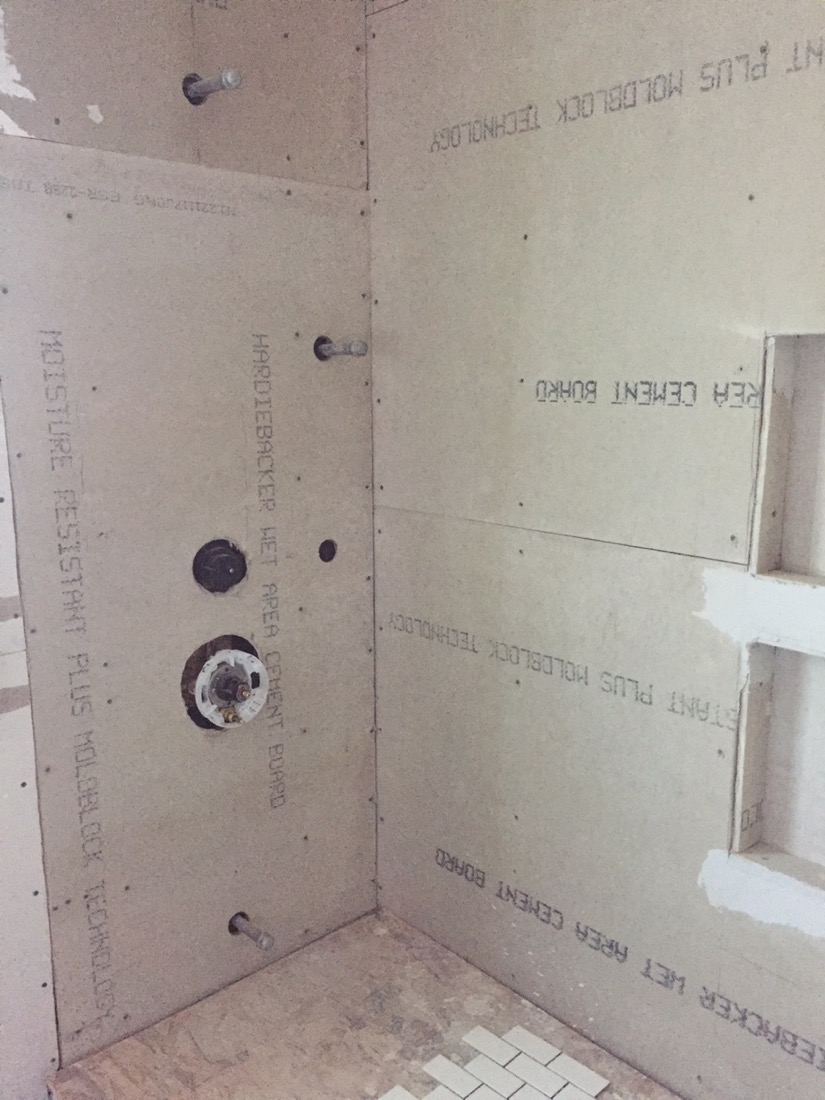 You’ll notice a few things in this picture; first we have two shower heads and two valves. The lower valve is the main water control, and the upper switches between the two shower heads. The pipe to the lower right is for a hand shower, and the higher one will be a big stationary head.

It was harder than we thought to find fittings that matched and allowed the hand shower, but Kohler had a good collection that let us get it done for a fairly reasonable cost, and hopefully the long term quality and temperature regulation are good enough that we avoid buyers regret.

Some of the other options we found when we were shopping had flow rates as high as ten gallons per minute, but both of these are California-legal 2gpm. That’s important for conservation, but also so that it doesn’t tax the tankless heater that we’re planning to install to replace the old one that’s past it’s life span and is a bit leaky.

We hear that the bathroom may actually be finished within a week! As slow as everything else is going that almost doesn’t seem real, but I guess that’s what you get when you hire professionals. 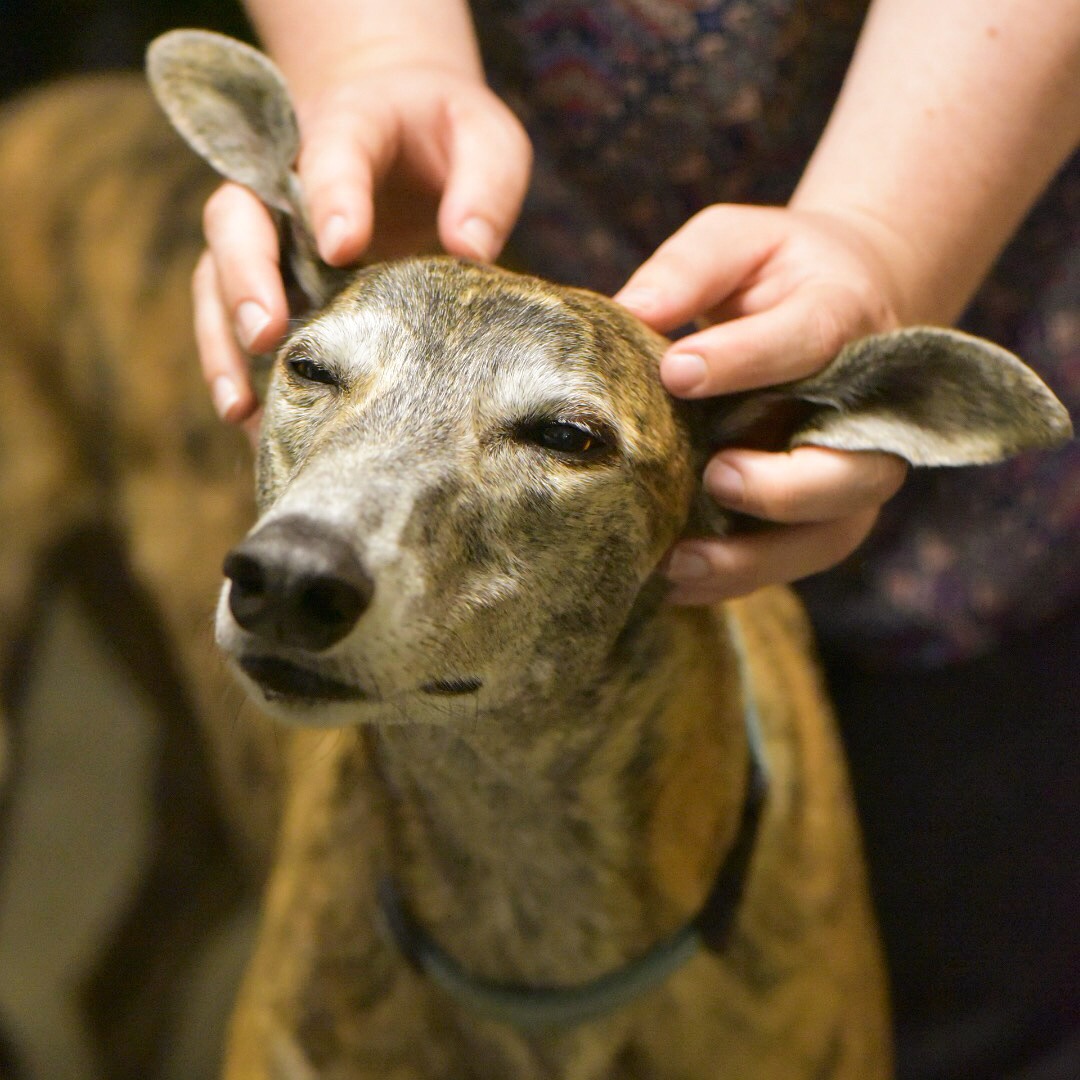 This morning I had to take care of something for work, and Kaitlyn headed over to the house before me and got the baseboards coated in Citristrip. By the time I got there they were ready to go, and we spent a while scraping the paint.

This part is gross, but… I got really pruney inside my rubber gloves. Not fun! 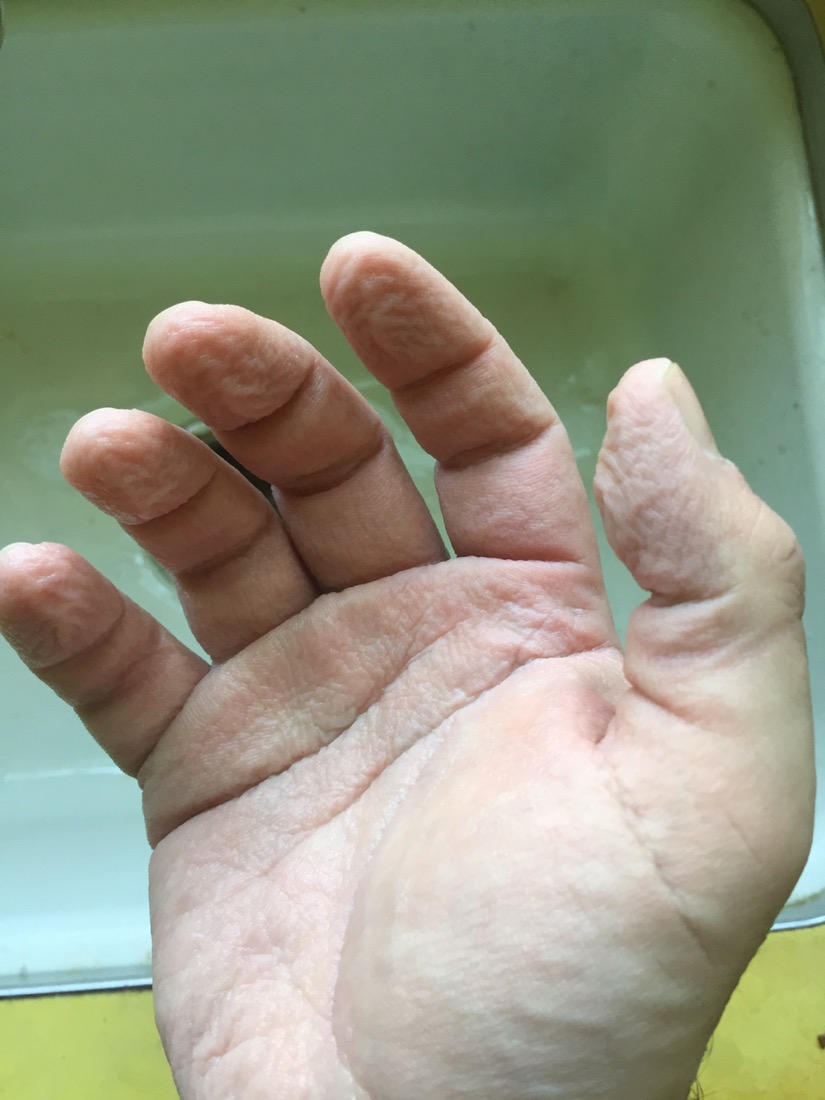 It also became clear that we need to think more seriously about popping these off and really finishing them well outside. It just isn’t that easy to get the edge that’s close to the floor. I read an internet tutorial, and it worked out pretty well. Fist you insert a couple of flat blades in between the wall and the molding: 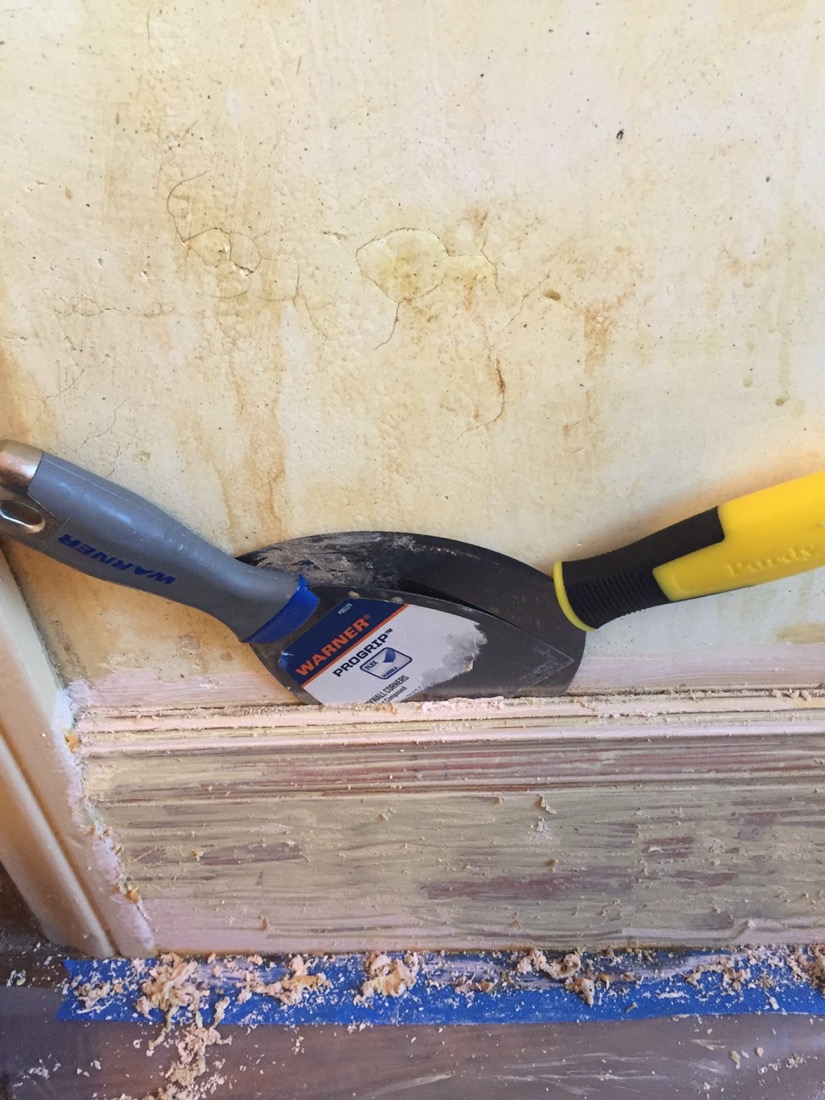 You have to use really thin blades to get in there, and I already found out how easy it is to bend a corner. I might have to grind that off…

Anyway, the next step is to stick a pry bar in there and carefully work your way around all of the finishing nails to pull the trim off. 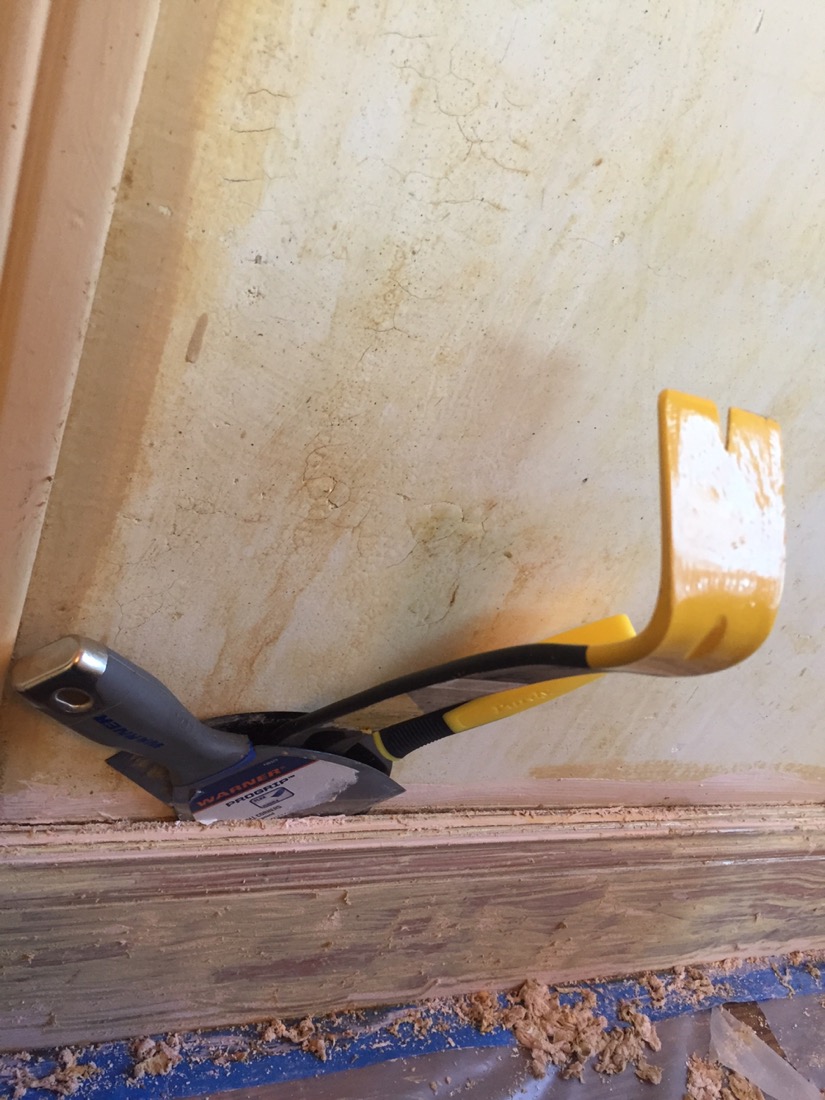 To our surprise, this baseboard is actually two pieces. There’s a small decorative piece at the top that came off with just a little patience, but the bottom board is plain and attached much more firmly. I think I’m going to get them off, but I had to call it quits for today.

Another surprise from the house is the number plate. 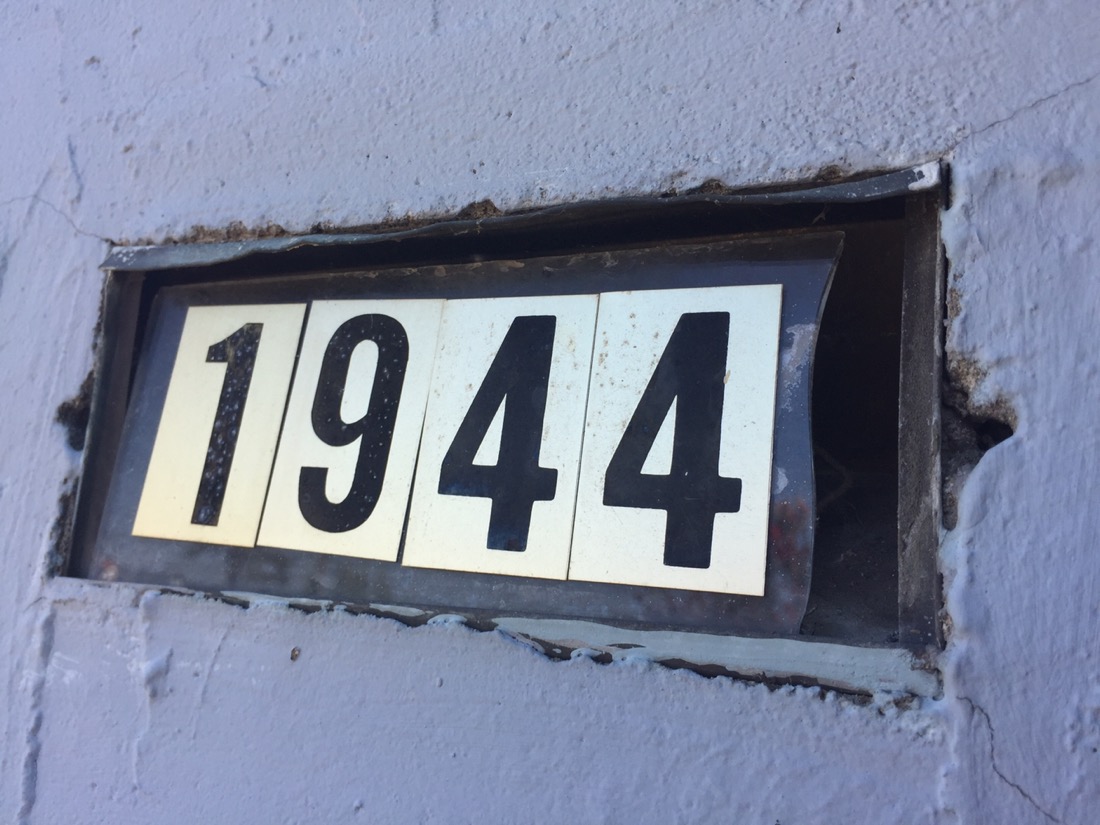 What’s up with that? 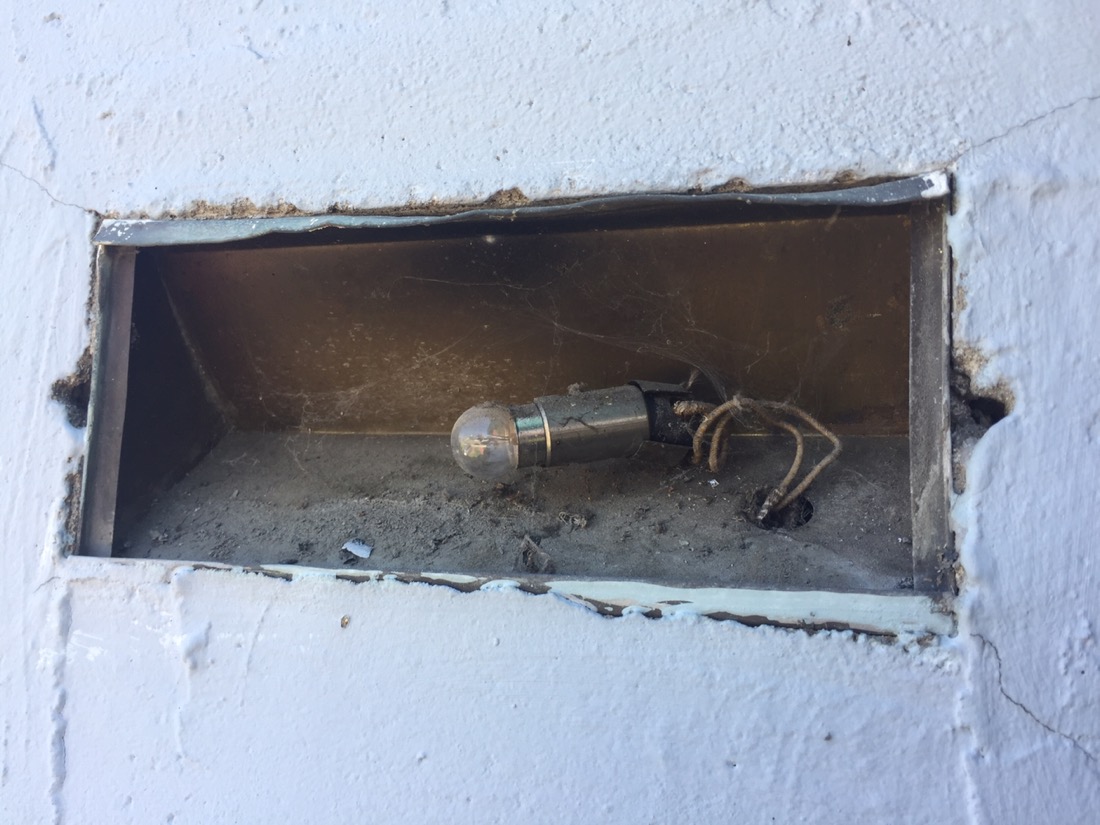 Apparently this used to be illuminated! I’m not sure if it’s on a switch, or what. It wouldn’t work very well with the numbers that are on the glass right now. I’ll need to do some work to get some back-lightable numbers, in case I ever get the illumination back. 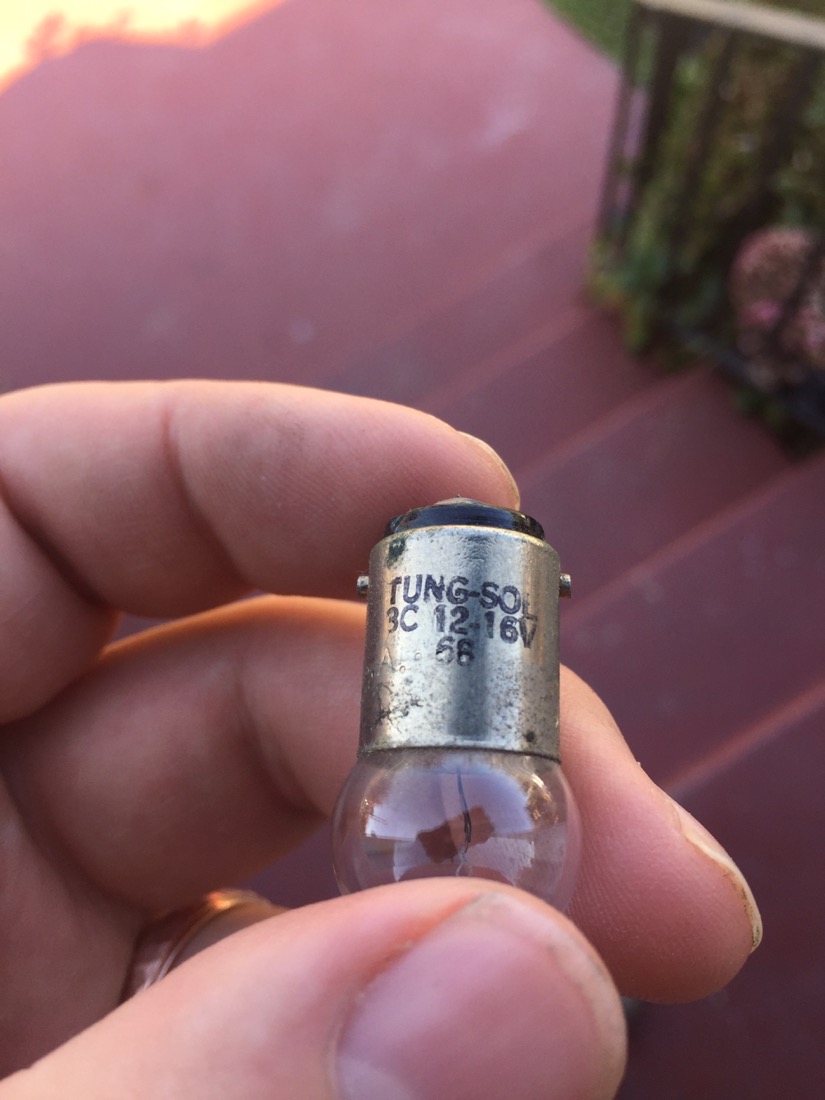 12-16 volts… that means there’s a transformer in the wall somewhere! Next time we go back I will bring a multimeter to see if it still works.

One of the first places we got to work was the bedroom, the one we want to be our room. It’s the one without water damage, and it is the farthest from neighbor’s houses.  Over the last few weeks we have stripped off all of the wallpaper and have prepped the walls for plaster repair. 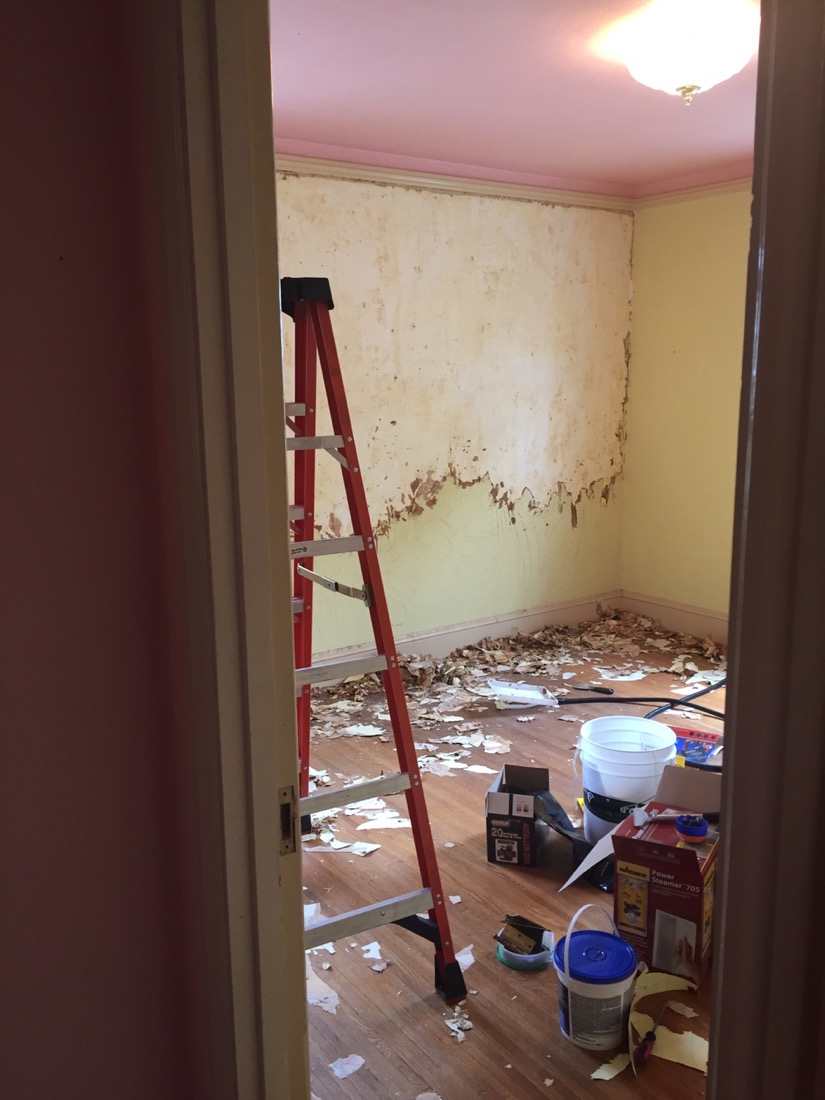 Rookie mistake, we forgot to put down plastic first. We plan to redo the floors before we move in, but…. it just wasn’t good. 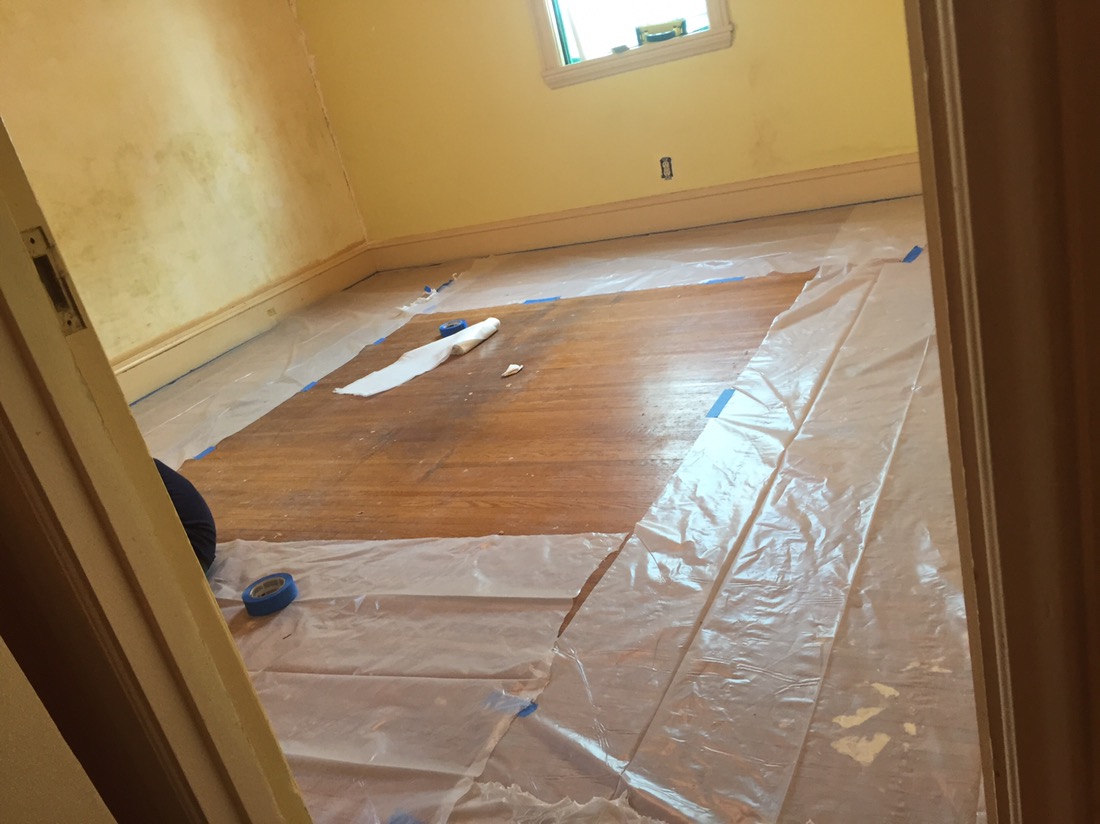 Better… for it all cleaned up, plastic down, as now we start on the molding. We spent about 10 minutes trying to sand it, and it was a stupid gummy mess that wasn’t going anywhere. Now we’re using Citristrip. 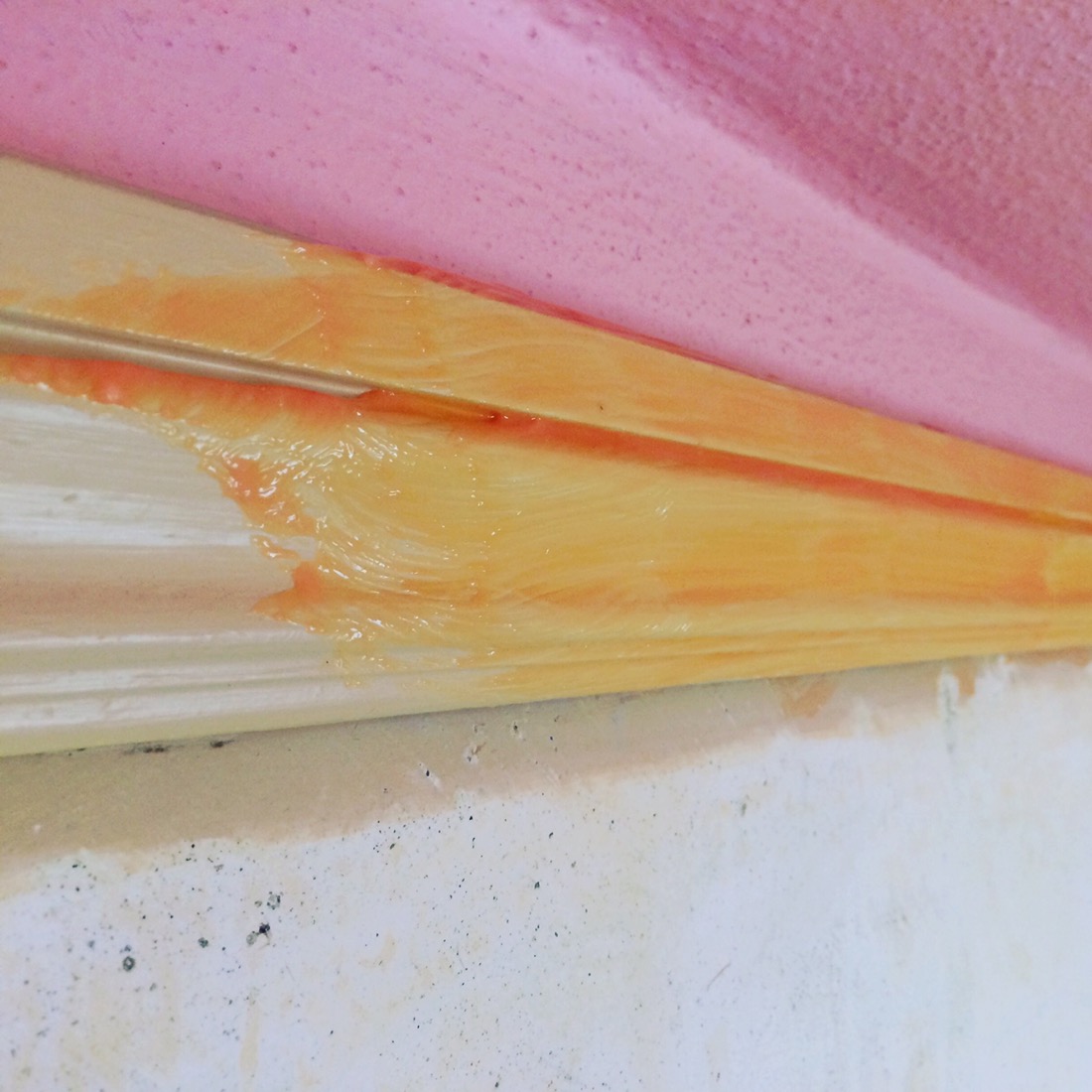 It goes on like spreading jelly, and it doesn’t smell too bad. I don’t bother with anything but safety glasses while applying it, but I use rubber gloves and a respirator while scraping it off. 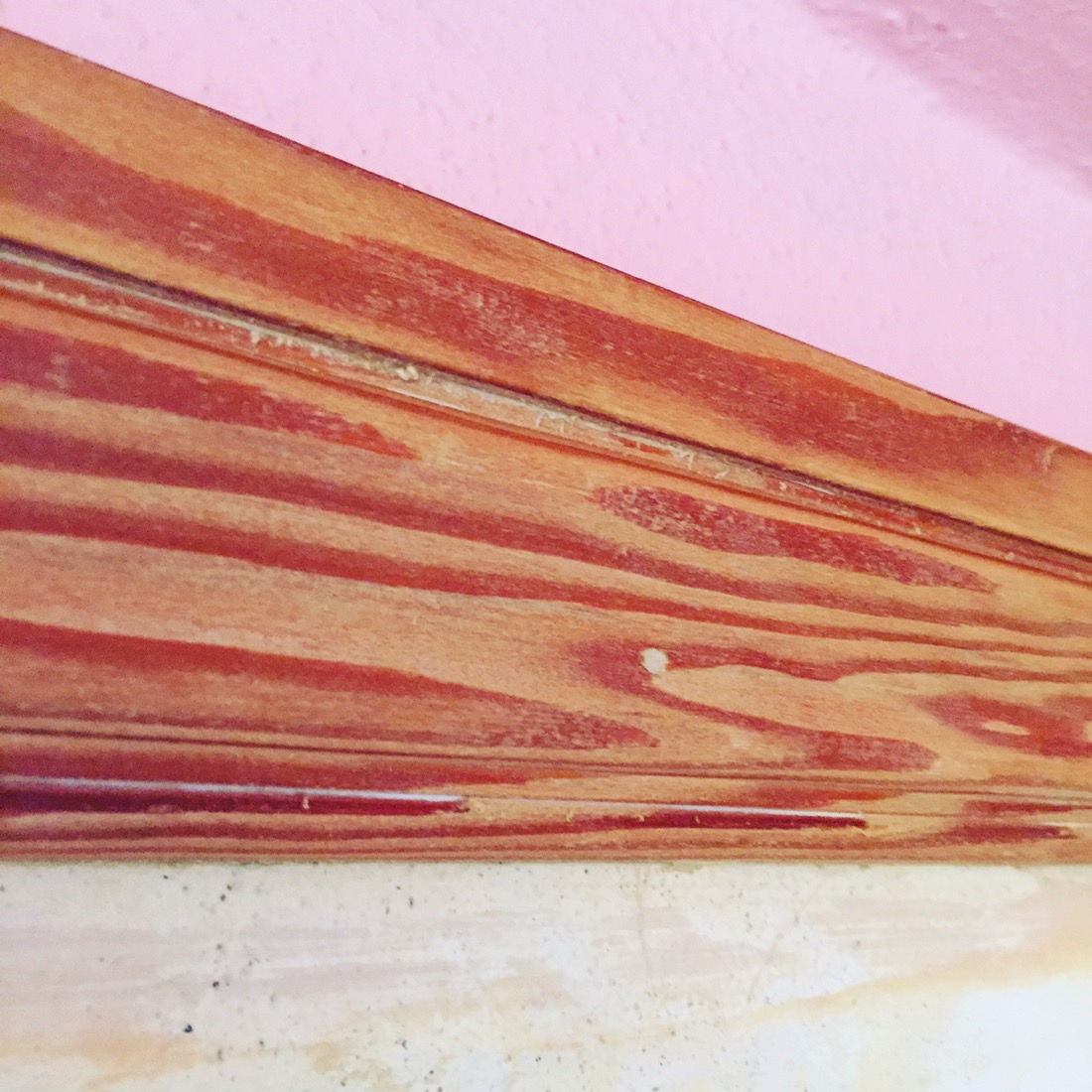 This is what it looks like after two rounds of citristrip, and some rubbing with a scrub pad soaked in mineral spirits. We think it might be worth doing it all, and staining it.

That’s going to take a while though! My P100 respirator wasn’t doing anything for the fumes, so we took Penny out to Orchard Supply and picked up some cartridges rated for organic vapor. After getting some box fans for enhanced ventilation I might get to keep some brain cells.

Bonus picture of Penny in her OSH gear! 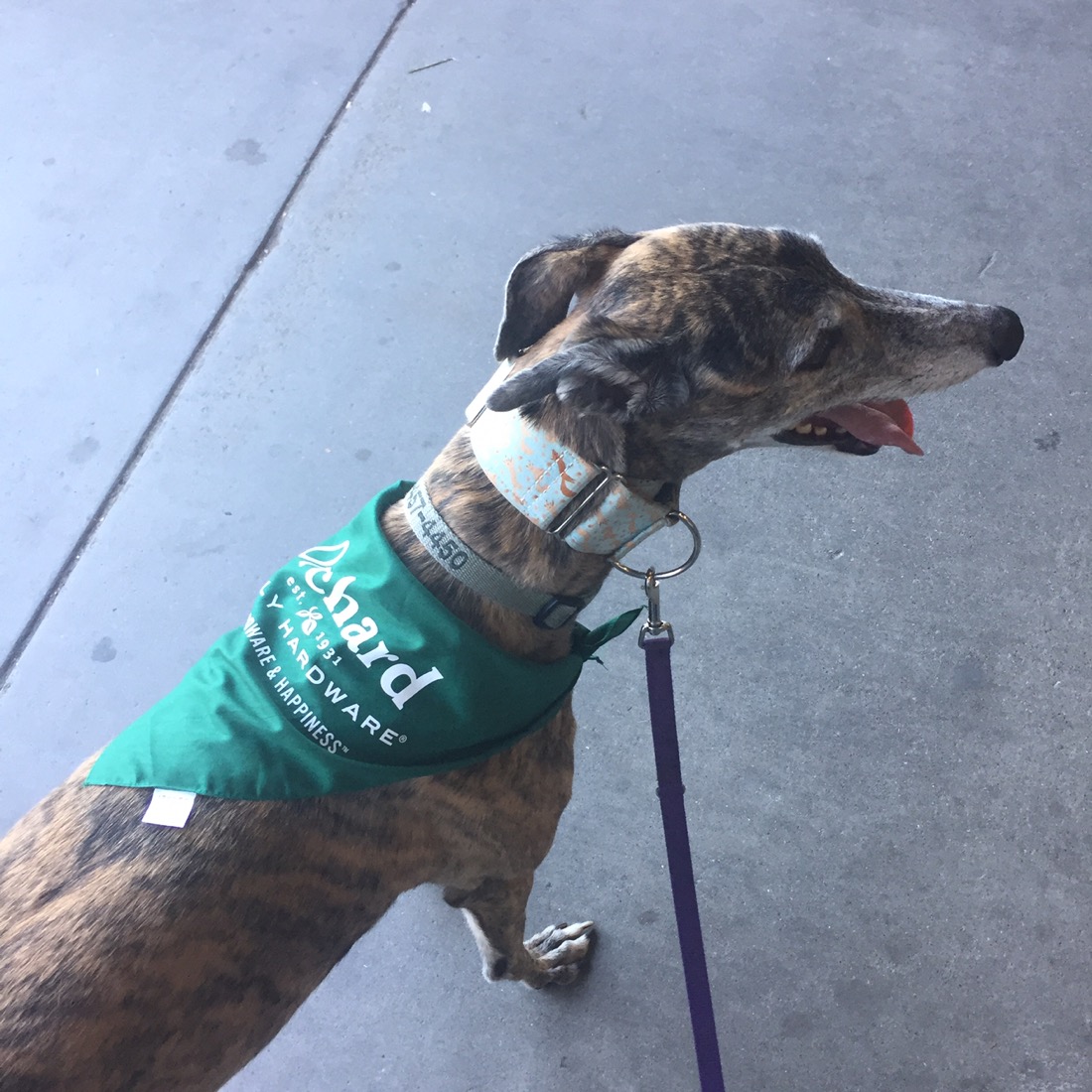 This is just a mini update, but I was too excited at seeing the tiles that Kaitlyn picked to not post something! 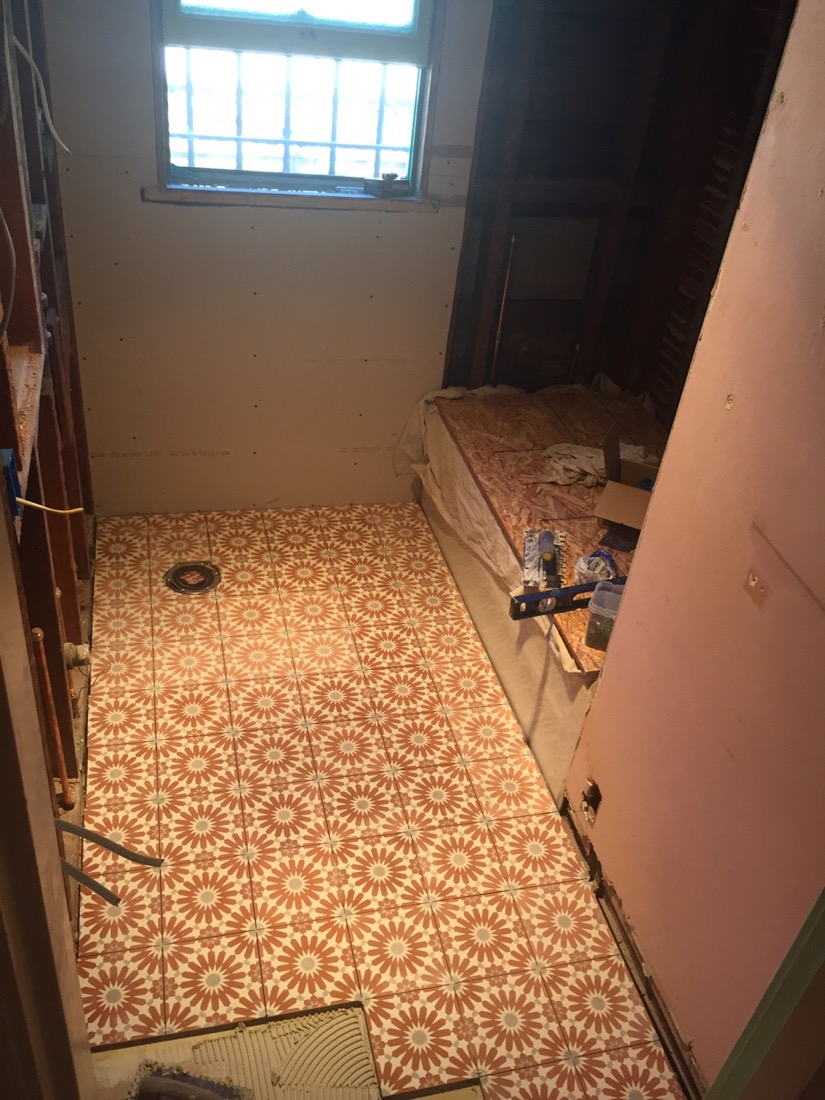 The contractor is still hard at work, and we are making sure that we have received all of the bits and pieces they need. The bathroom fan is installed, the replacement sink is delivered (and not shattered like the first one!), and all of the shower fittings are accounted for. I verified that the toilet’s waste hole has been relocated to move the toilet flush against the wall, so we won’t have any heartbreak moving it again. The next milestone is plumbing inspection.

We are still waiting for our high efficiency toilet to arrive Monday, and I think that Katitlyn is picking up light fixtures from UPS this afternoon.

We’re going to have a few fast updates this month! One of the very first projects that we’re tackling before we move in is the bathroom. We are spending a major  chunk of our house prep budget on a contractor to get it done quickly (and right), but there’s only one bathroom in the house so we wanted to get it taken care of before we’re living there and before we have the floors refinished. Here’s what the bathroom looked like yesterday: 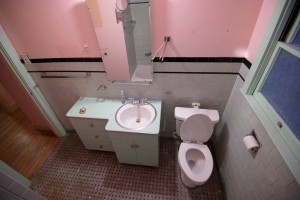 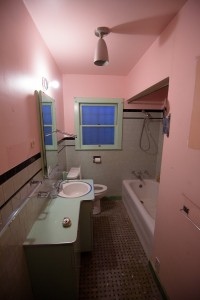 This will be part of the dramatic before/after shot

The house was built in 1927, and our best guess is that the bathroom was renovated some time in the 1950s or 1960s. The floor was tile, but all of the green ’tile’ that you see is some kind of plastic. It wasn’t in terrible shape, but there was a bit of water damage and rot in the tub area. It seems like the toilet was replaced some time more recently, based on the strange spacer behind the tank. 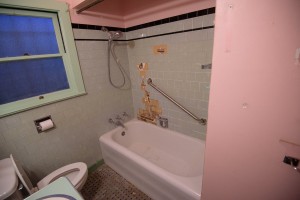 The tub with water/hammer damage

One contractor told me that the wall was totally rotten and bad, and would definitely have to be removed. I didn’t know much about old houses at the time, and he stopped communicating well, so took a hammer to the wall and had a look to see what was behind the tiles. It turns out that it really wasn’t that bad, so although it was going to have to get busted up to do anything with plumbing and electricity, it probably wasn’t in imminent danger of destroying the house due to water damage. Regardless, we were committed. Redoing a bathroom is messy and tends to put it out of commission for a couple of weeks, so here we go. 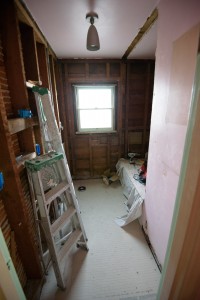 Today demolition started, and it honestly looks like they demolished most of what they needed to demolish. The upper dividing wall above the shower curtain is gone, everything is down to the studs, the tile is out and hardiebacker is down. So far so good! 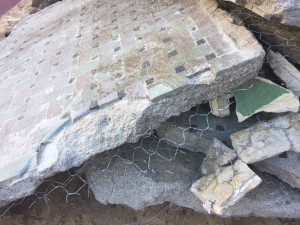 I was worried that the backing under the tile would be so thick that we would end up with a significant level mismatch between the tile and wood, but as thick as this is I’m hopeful that they’ll get close to a match.I don’t understand how the wire mesh worked structurally, but the floor seemed to be in decent shape after 90 years. I’m just hopeful that what we’re putting in now will last as long. My lovely wife Kaitlyn picked a really cool tile pattern to replace it, and I’m looking forward to a bold reveal post. 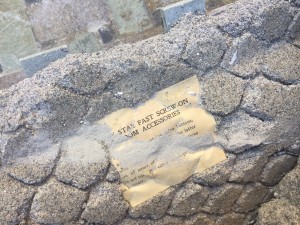 A note from under the flow

Is this a time capsule? I think it may have been a piece of packaging from bathroom accessories that fell beneath the cement when they started making the bathroom. I don’t think it was worth digging out and deciphering, but it was interesting enough to get a picture. 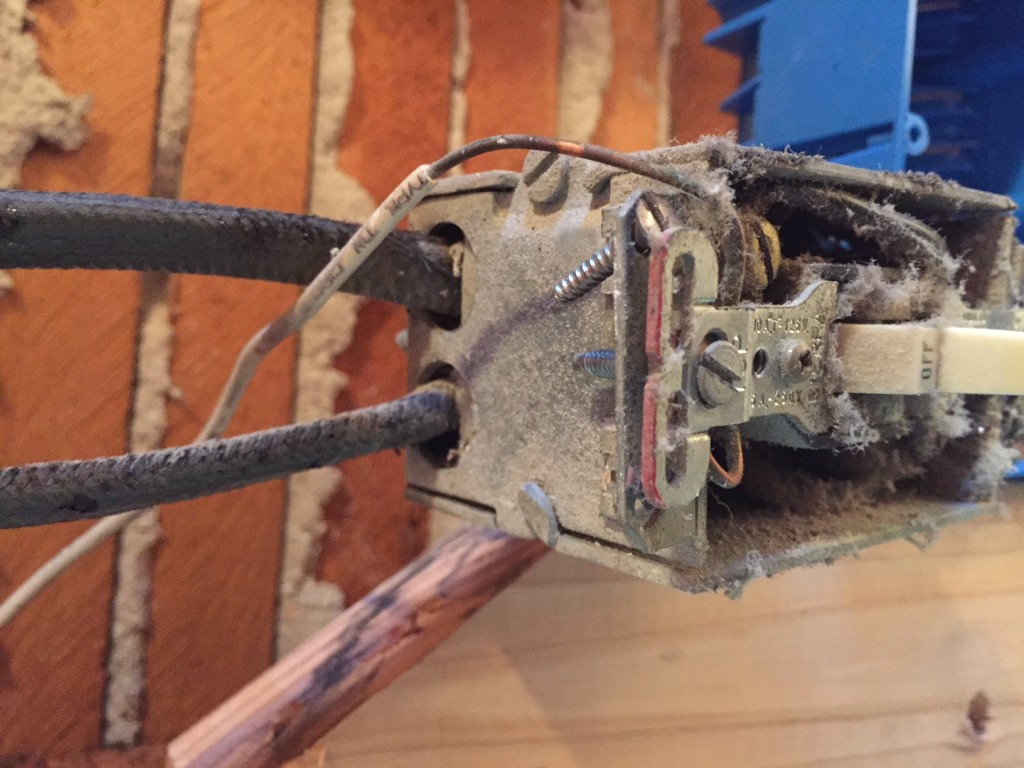 Here’s another piece of the house’s history. This is one of the light switches, and it appears to be not original, it appears to be grounded, and… maybe not connected to any knob and tube? One of the things on my to-do list is to get an electrician in here to check everything out and see if any of the knob and tube wiring is still live. 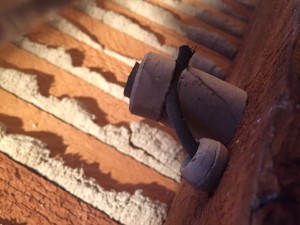 knob and tube in the bathroom wall

This one *is* a piece of knob and tube wiring, and it was attached to a two prong outlet that was hidden behind the vanity. It looks like it was cut off a long time ago, and the outlet had what was probably an original 1927 unpainted brass cover plate. It’s neat to see, and I hope that it’s also good to find this kind of thing and see that people working on things in the past didn’t leave too many scary kludges in the electrical system.

That’s all for tonight’s bathroom post tonight, so here’s a shot of Penny exploring our place!

This is probably the biggest project I’ve ever tackled. We bought a 1927 house!

It needs some love, and we’re learning as we go. Watch for new posts. I’m adding Kaitlyn as an author here, and we hope you’ll enjoy sharing in our journey. 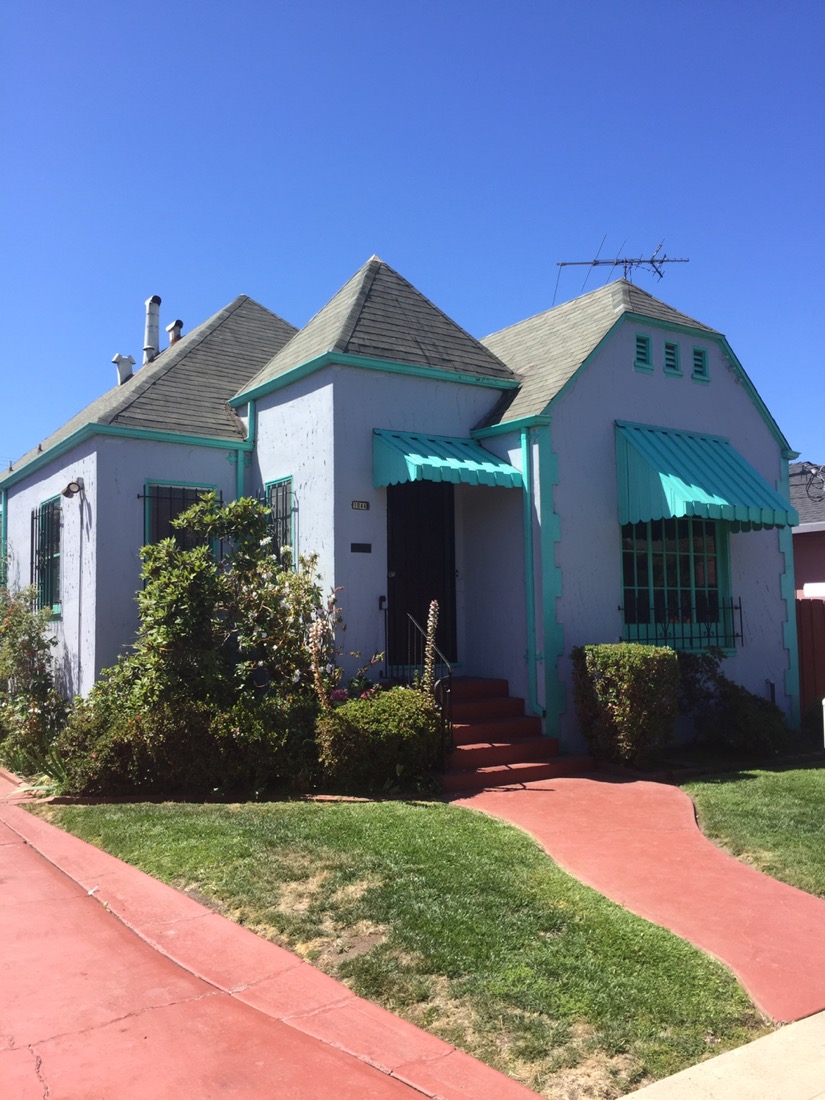