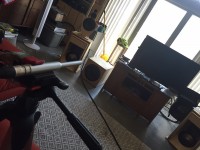 This is a topic that I’m still fairly shaky on, so anybody out there reading this as a possible reference should probably take this all with a grain of salt. After building the LX521 speakers I could tell that they weren’t delivering precisely the sound that I know that they’re capable of when they’re set up correctly. As you’ve probably seen in photos, Siegfried Linkwitz’s home does not have any visible acoustic treatment, just some normal ‘stuff’ around the room. Furniture, a nice rug on the ground, nothing like walls full of acoustic foam or avant garde looking diffusers. It’s just a regular room, and most people who build his designs agree that you don’t to do anything special to get the good sound.

Before we go too much farther, I should say that there are two different things that I’ve noticed about the sound in my system that differ from what I heard when I auditioned the original. First, I hear a bit more of the room in the bass response than expected. Things boom/echo just a bit, and its’ the difference between a natural sounding reproduction of a sound that can truly fool you, and the sound of a speaker in a room. We’re not *quite* there yet, though it’s miles better than what I had before. The second part is that there’s a bit of imprecision in the imaging. In the demo I could very plainly localize sounds in space, like I could hear a xylophone player moving up and down the keys and tell the left/right position of each key. That might sound like a wild claim, but that’s what I heard and what convinced me that this thing was worth building. Having my TV between the speakers may be hurting the sound a bit, but I think there’s more that needs to change than just that.

I’m setting out to learn how to improve the sound of the speakers in my room, and I want to be able to do this well enough that when we eventually move I’ll be able to repeat the process with a reasonable certainty that I’ll be able to make the stereo sound good there too. I’m using a program called Room EQ Wizard (REW) to perform measurements. I use a Behringer ECM8000 room measurement microphone that I’ve had for years, a small powered mixer, and my computer sound card to capture the sound. Based on the reputation of the microphone and a loop-back measurement that I did with the rest of the signal chain, I think I have a fairly accurate measurement system…. if I can figure out how to use it right. 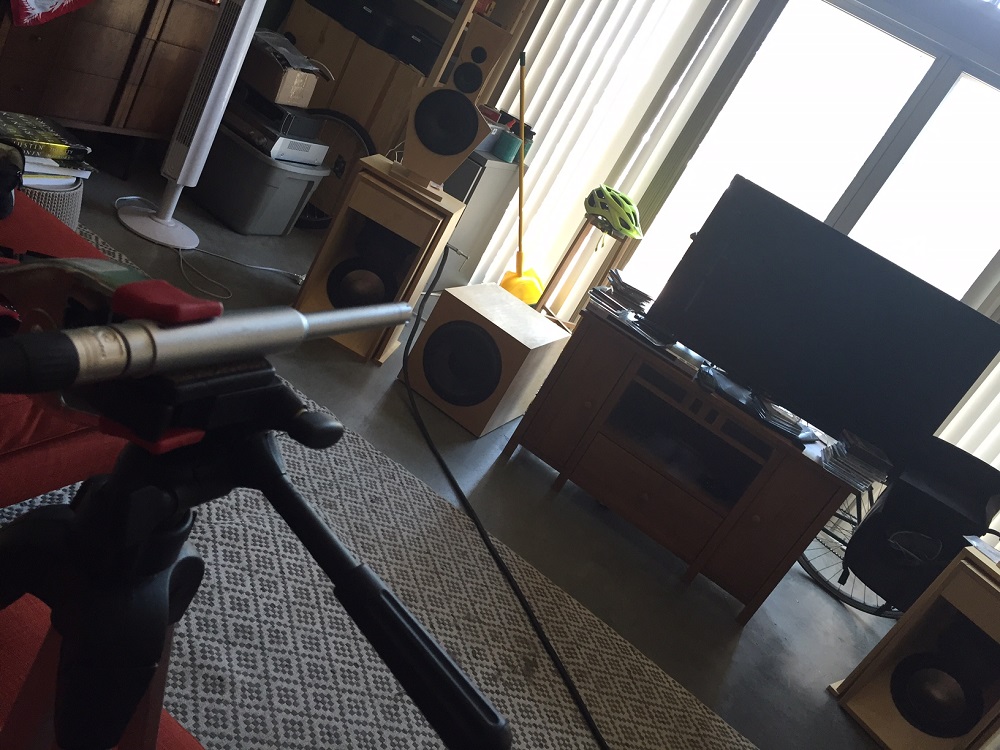 For my first measurement I put the microphone on a tripod positioned at the spot where my head would usually be, and ran a test sweep from 20hz to 400hz. I did a few more, but for the purposes of room equalization I thought that I was interested in things below 200hz. 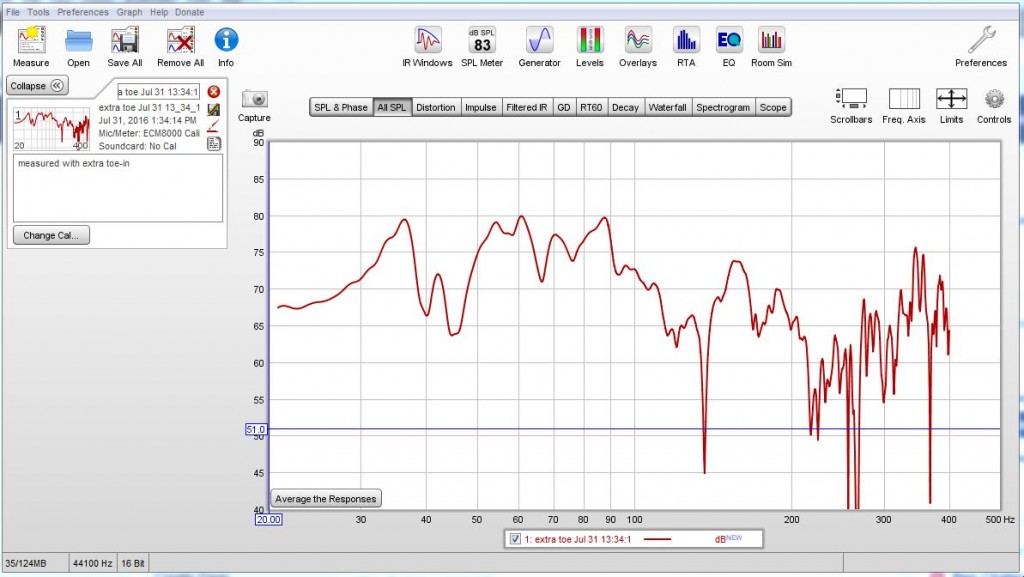 The first thing that you’ll notice is that this response looks totally ragged and nasty. It’s hard to say exactly where the average is if it was ‘flat’, and there are clearly peaks and dips of 10db. That’s partly because this is a real in-room measurement, the room isn’t treated with much of anything, and it’s like a big echoing box. Concrete floor, flat ceiling, thin rug that doesn’t cover much, and not much stuff on the walls yet. Regardless, there are some good things about it. The response doesn’t drop like a rock below 30hz, and I can tell you that the woofers really made some impressive sounds in the mid 20hz range. The system can do bass, but the room still needs help. Lets see what we can do.

After collecting this data I opened the REW equalizer window, and I selected “miniDSP” as my equalizer so that the program would know what it’s allowed to do in terms of suggesting correction. I assume that some of the other selections have more or less EQ bands available. Next I had to come up with the ‘target settings’. This is what tells the program what you want the ideal system to do. I have some trouble with this one, knowing what to set. I think maybe this is where a sweep to more like 20khz would have given me more information about where the average is supposed to be. Regardless, lets give this a shot. 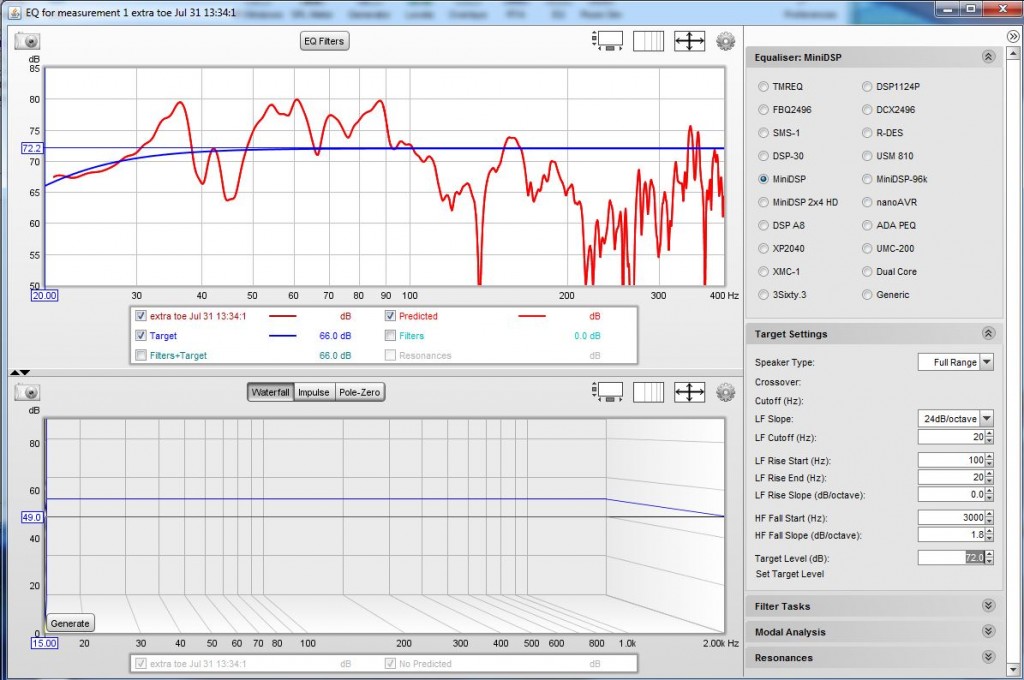 I picked 72db as a target level, set the target as flat with a 24 db/octave rolloff at 20hz. For a full range equalization I hear that you are supposed to set a gradual rolloff above 1 to 3 khz, but I’m mostly interested in taming room modes here, and those are all well below 1khz.

In Room EQ wizard I clicked on the “filter tasks” tab and then “match response to target”. It twiddles things around for a second, and then gives five parametric EQ settings that shifts the response to something closer to the target. 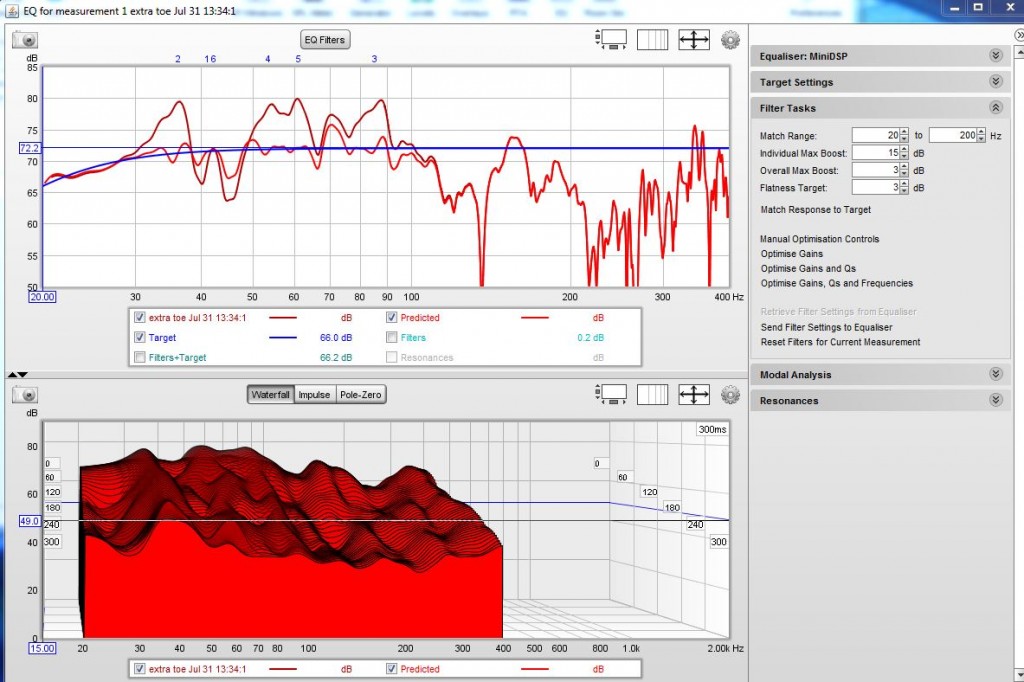 Here you can see a brighter red line that is closer to the blue target, and a brownish line that’s the original response. The bright red line is the predicted response if I load the EQ settings. I’m able to save those to a text file and then use my MiniDSP software to read those, or I could enter them manually. Clicking “eq filters” let me see what those are; they looked like this: 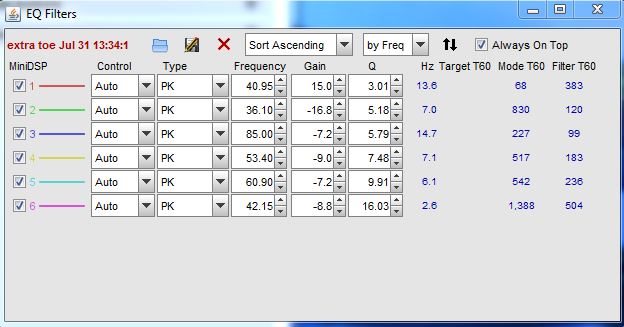 Overall it’s a few sharp cuts at specific frequencies, and a broad boost at 40hz, giving the flatter response. I loaded these into the second configuration slot on my MiniDSP, and now I can flip back and forth between the unmodified and equalized versions. That has been very interesting.

Subjectively it sounds as though most of the room ‘boom’ is gone. However, I still somewhat prefer the unaltered version. The equalized version seems to take too much of the bass away. That may have to do with my target curve, or it may have to do with the settings when I clicked “match response to target”. The MiniDSP 4x10HD allows four configurations to be stored, so I could even try a few different versions and audition them each without leaving the couch.

I’m going to hopefully meet with some local audiophiles to discuss this more, and when I get a chance I’ll repeat the measurements with a few changes. Other than dialing in the available EQ, I think that my next step might be to hang up something cloth on one or more walls to absorb some of the sound that’s bouncing around. It’s a lot to research, but I’ll keep reporting back as I figure it out.