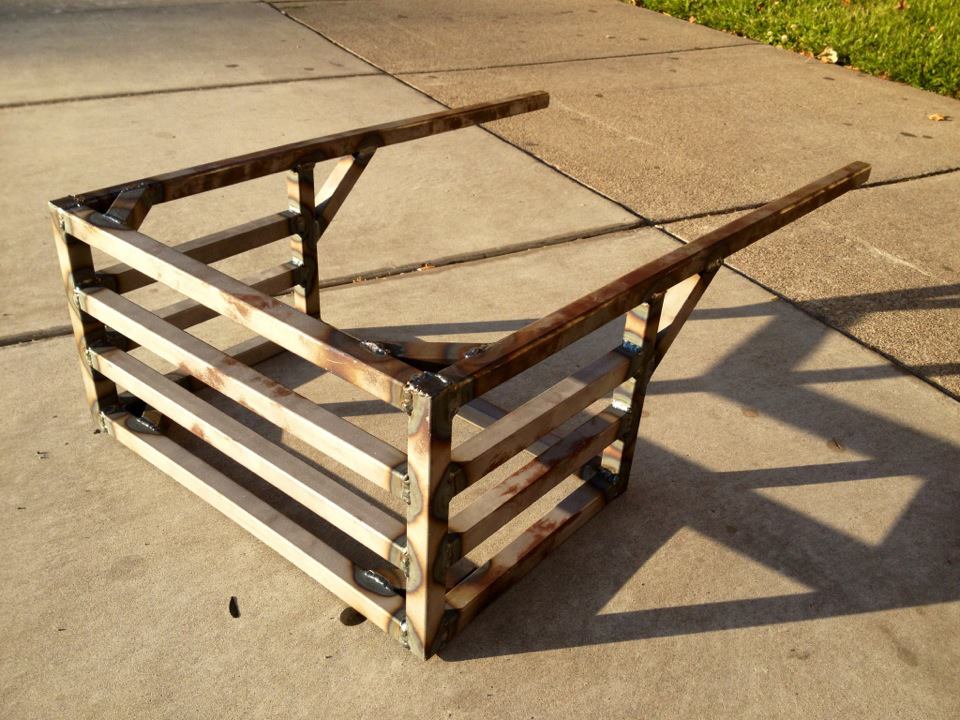 Here’s what I finished welding today!

It’s not as lightweight as the other guards I’ve made, but it’s a copy of one that’s working well. One of the players dads made one just like this, and this is a copy. The thing is STRONG!

This month I’ve been working on power soccer equipment for Borp. Not to brag or anything, but I think it’s OK to toot your own horn every now and then, and now seems like a good time to do it. Here’s a list of what I’ve been up to:

All in all, I have made about 80 welds, machined 13 aluminum parts, six steel parts, and spliced six wires. This allowed one person to play who could not play before, and hopefully improved the competitiveness of five other players. It has been a good month, and I’m not done. Hopefully I’m just getting started.

I have big plans for new things to build, and ways to get more people playing at higher levels of competition. Let me know if you want to help!

I’ve had an amazing time traveling the country, working on personal projects, and making new friends for the last few months. However, it’s time for a new chapter. My dream is to work in a product design firm, or at least the R&D department of a company that regularly makes new products. I have assembled my resume and portfolio, and have begun submitting applications.

If anybody out there reading this might now know a position, please email me and let me know. I am focusing on jobs within commuting distance of downtown Oakland, California, but for the right job I am ready and willing to relocate.

Also, if you looked at my resume and portfolio and you have any feedback or criticism, hit me! I’m all ears.

After my bike tour I spent the first couple of weeks off of my bike, and was slow to get back on. First I was trying to let me hand heal (trying to regain 100% sensation in the fingertips of my left hand!), and then I caught a nasty summer cold. I set up my desktop PC to begin my job search in earnest, since there’s only so much you can do from a cell phone. As I set up my PC and regained full connection to the world wide web, I noticed something was going on: I was spending too much time surfing the internet! This absolutely wasn’t something I had been interested in while I was riding 60 miles per day. I kept up with my blog and checked my email, but not much beyond that.

Just by chance (Or not? I was looking at a lot of websites as I recovered) I came across an article about internet addiction and brain chemistry. I don’t remember the exact article, but if you google for “internet dopamine” then you’ll see that there are a lot of articles on the subject. It boils down to the idea that there are a few psychological things going on that trigger a little hit of dopamine on a very regular basis while you surf the web.

The first mechanism that I find interesting is the way we’re wired to want to know our surroundings, and constantly scan for danger or changes. I think it’s one of the reasons that when we live in the suburbs we like to have wide flat featureless yards of trimmed grass around our homes, and why games like Farmville take off. This is a pointless way to trigger your reward center because the internet is always changing, and by and large those changes you discover are not relevant to your life in any way. You just see something that wasn’t there before, “Someone just posted a picture of a cat!” and you get a tiny hit of dopamine.

The second part that I feel more ambivalent about is the way we are rewarded when we learn something new. It’s satisfying to learn something new, right? Even if it’s some stupid little random factoid that doesn’t apply to our lives, and may not even be adequately supported- it feels good to learn. The internet is also a great source for learning, not just a constantly shifting sea of ‘new things’ to spot. The internet is an incredibly powerful tool for gaining useful knowledge, but it also lets you go and click on the random wikipedia article, and spend half an hour learning about things that have no relation to anything, at a superficial depth, and in such an undisciplined way that you’ll only retain a tiny fraction of that knowledge.

Social media also triggers this small (meaningless?) release of dopamine. Seeing a loved one’s face, or hearing of a friend, or thinking of somebody you have a crush on are all things that give this rush of brain chemicals (great TED talk on that, by the way), so by flipping all over the internet and revisiting facebook/etc, it’s possible to sustain a lot of little hits of dopamine, and something like an addiction develops.

I didn’t set out to write this post about internet addiction, although that’s how it seems to have turned out, I began on the subject because of what I noticed while I was riding 50+ miles per day. I had a constant ‘high’ going, and my level of interest in all things ‘trivial internet’ went down a great deal. I definitely had days where I’d take a break and surf on my phone, but I didn’t feel the same ease of losing an hour to it that I do when I don’t have a baseline level of exercise going on.

During my regular routine before the trip I had about five miles per day of biking, plus some walking. It was enough with a reasonable diet to not feel like a total slob, but I realize now that I wasn’t getting nearly the level of exercise that my body craves. Since the trip I start getting an itch to go for a ride. I guess that developing an addiction to real exercise is a great outcome from all of this. Hopefully it will allow me to remain more focused and relaxed, and maybe get down to a really healthy weight.

That’s all for now, I’m going for a ride!

I would love if this happened to me!